Carli Alves never set foot in her house before buying it. She didn’t see any pictures. She didn’t even really expect to buy one that day. She and her husband decided that they were looking for a property to flip, and he went out just to look at some homes on the market in their area of Rhode Island.

Cut to Carli, at work, picking up a phone call from her husband. “He went and saw it; he put down a deposit,” she says with a laugh. “We hadn’t even been planning on moving or anything like that. We were just casually looking for a flip house.” Shocked, Carli made her way to their new project after work. “It wasn’t love at first sight,” she says, “but when I walked in the doors, I was like ‘Oh my God, we have to have it. This has to be my house.’” 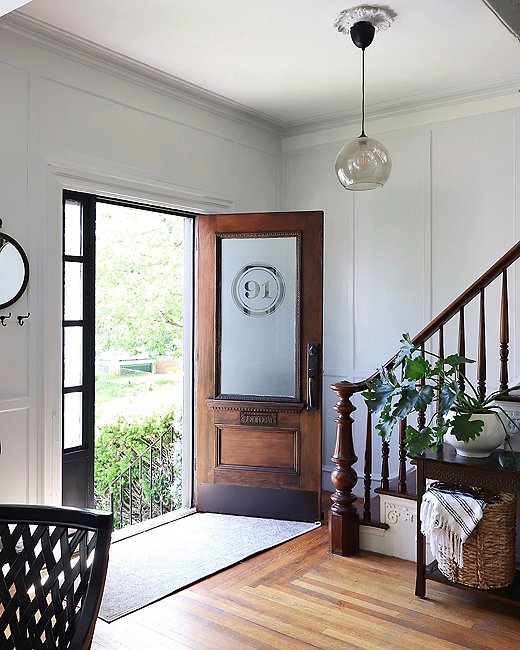 This charming front door matches the Victorian exterior of Carli’s house and helps set the tone of Carli’s traditional-meets-modern style.

Two months after closing the sale, Carli and her family sold their starter house and moved into this 1878 fixer-upper. During that short time, Carli and her husband brought in some help to make things livable. They hired plumbers, electricians, and skimcoaters to fix what they couldn’t, but they tackled almost everything else themselves. “There was still a lot of work ahead of us,” she says. She wasn’t kidding. The rest of the house was falling apart. She jokes about trading in her nice, builder-grade home “for this house that was in ruins.” Through the ruins, though, Carli could see a beautiful foundation from which to rebuild.

“We knew we wanted to keep as much of the original character of the home as possible,” she says. Carli envisioned a place where the traditional bones of the house could stand out around more-modern touches. “I found my own little style niche,” she says. She kept the ceiling medallions but installed mod pendant lights underneath. She ripped out the peeling toile wallpaper in a stairwell and painted it white. The rest of the house went white, and the overall palette was neutral, including touches of grays and blacks. Furniture was streamlined. Brown wood furniture throughout hearkens back to the house’s traditional roots.

For the first time in her life, Carli got to play around with a space that was hers. “I’ve always enjoyed decorating,” she says. The choice to DIY her home only seemed natural. “I think, like anyone else, it all started by watching HGTV shows and thinking I could totally do that.” It wasn’t a question. It was a fact. She and her husband ripped out walls, installed shiplap, painted and repainted. They were a two-person tour de force. (And they did all of it while living in the house with their four children.)

What she didn’t learn from HGTV is just natural talent. Carli has a knack for putting a room together with ease. She’s self-taught, yes. But her knowledge of color theory, scale, proportion, and flow all come from her innate sense of design. Years before she bought the house, her friends had noticed her ability to pull a design together. “It’s funny because for years friends said, ‘You have a knack for this,’” she says. “I was like, ‘This isn’t talent. What do you mean?’ It didn’t even register.” Now she’s a bona fide designer, her talent is obvious. 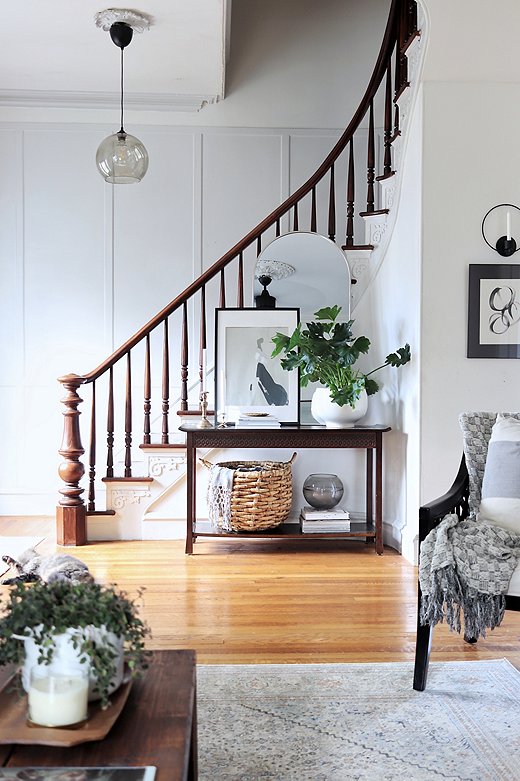 Carli kept as much of the original detailing in the house as possible. The ornate woodwork on the stairs stayed, but she painted it white to help it blend in. She used brown wood furniture throughout the house to ground the space in a traditional sensibility. 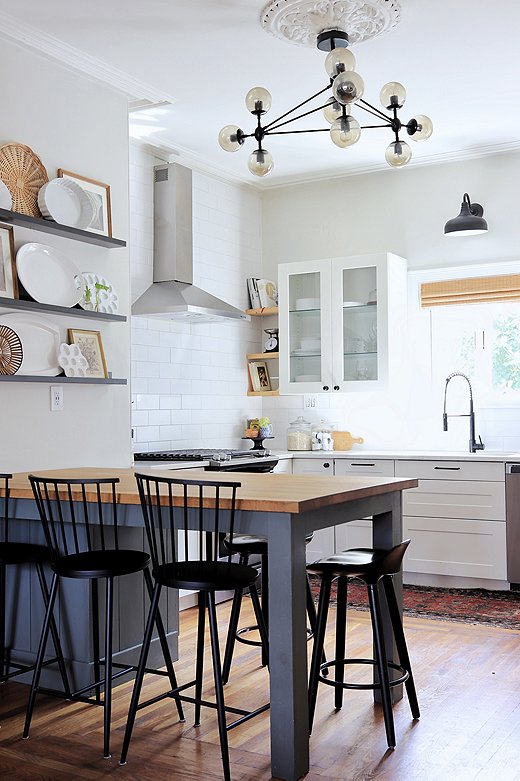 Ceiling medallions were a popular feature throughout the latter half of the 19th century. All the medallions seen in Carli’s home are original to the house.Find similar low-back stool here. 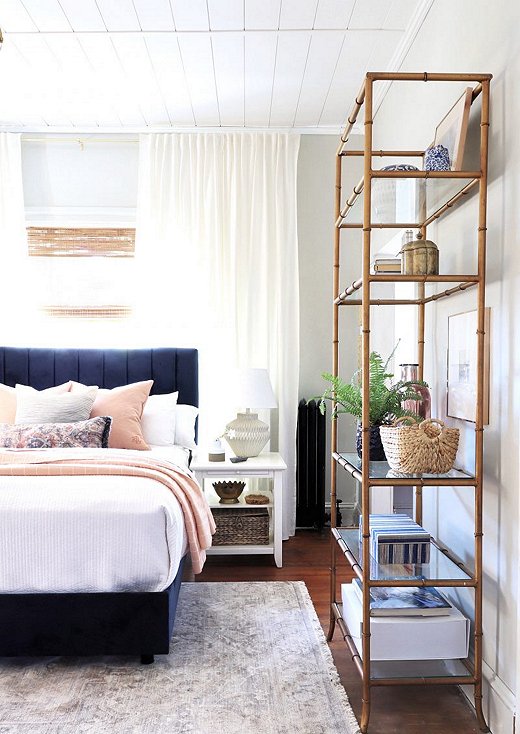 Carli opted  to bring in a dash of color in the main bedroom. The navy channeled bed serves as a nice background for the pops of pink. 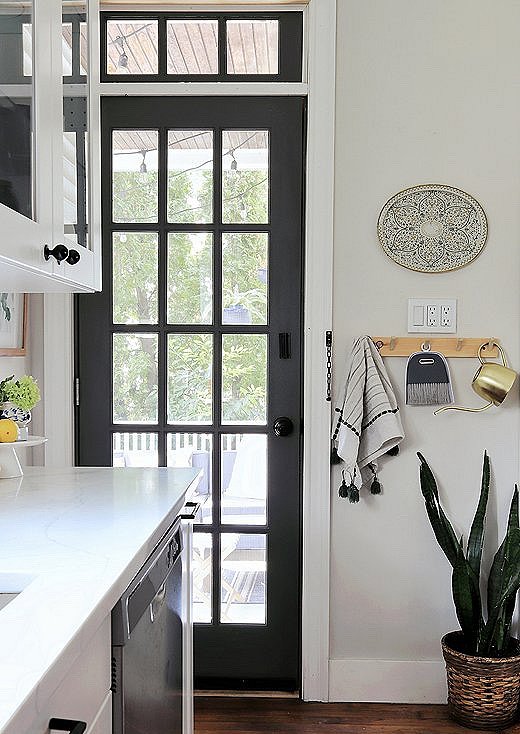 One of Carli’s favorite parts of the renovation was saving this transom window. Previous owners had boarded it up, and she restored it by hand. 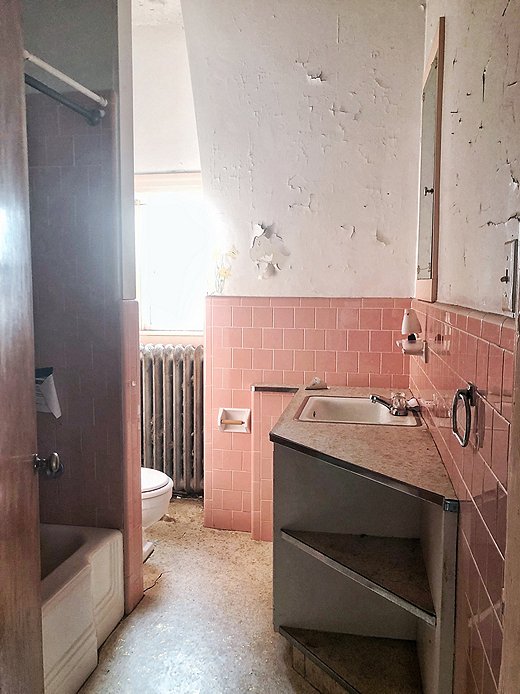 Pink tile might be having a moment, but Carli wasn’t a fan. She attacked this bathroom and removed the linoleum, counter, and all the features. She left the tile and boarded over it. 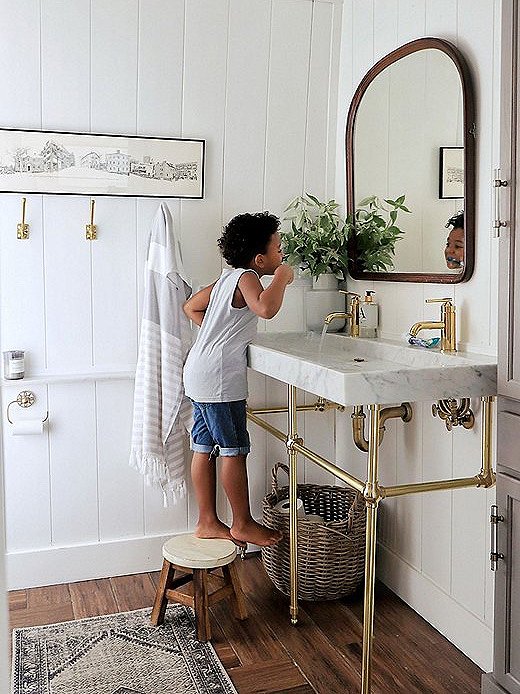 Carli switched a clunky counter for a more historically accurate bathroom sink. She used white shiplap boarding to lighten the space, which has only one small window. 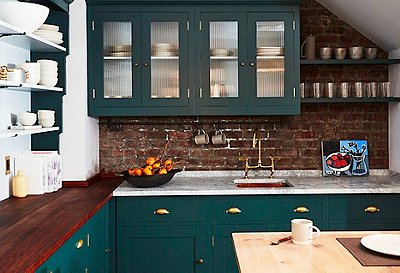 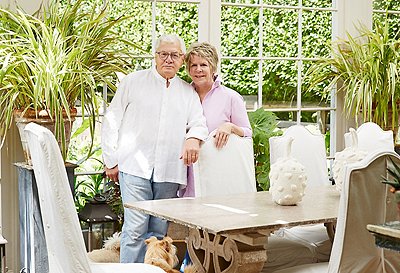 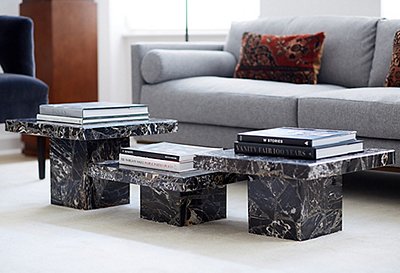 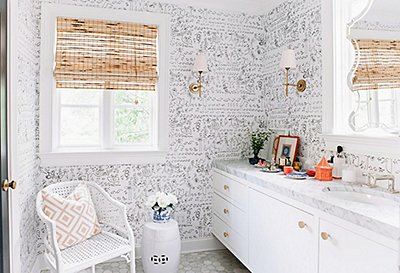 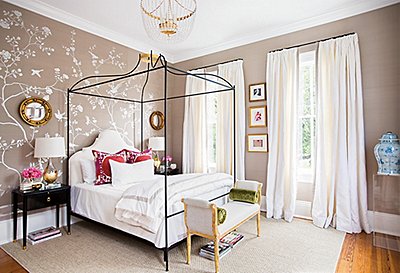 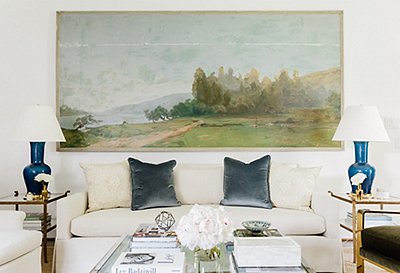