Erica Chan Coffman, the co-founder and editor-in-chief of the cult (and cheekily named) blog Honestly WTF, moved into an early 1900s Craftsman in Oakland, CA, in late 2013. But although she’d completed extensive renovations, her living room had been languishing ever since. “It was bare as bare can be,” she says. “Because the space is open plan and there’s a custom-built alcove on one side where the TV is mounted, I just couldn’t make up my mind about the design and layout.”

Always up for a challenge, we jumped at the chance to help Erica figure out this all-important room. Over many phone calls, emails, and shared Pinterest boards, Alex Reid, one of our stellar head stylists, nailed down the look with her: a picture-perfect family room where her son, Quincy, could entertain his toy cars and she and husband Abe could entertain their friends. Then Alex arrived at her door with amazing assistant Kate Smithson in tow to install all the gorgeous new furnishings over the course of three hectic days.

This is Erica’s diary of exactly how it went down.

DAY 1: IT ALL BEGINS 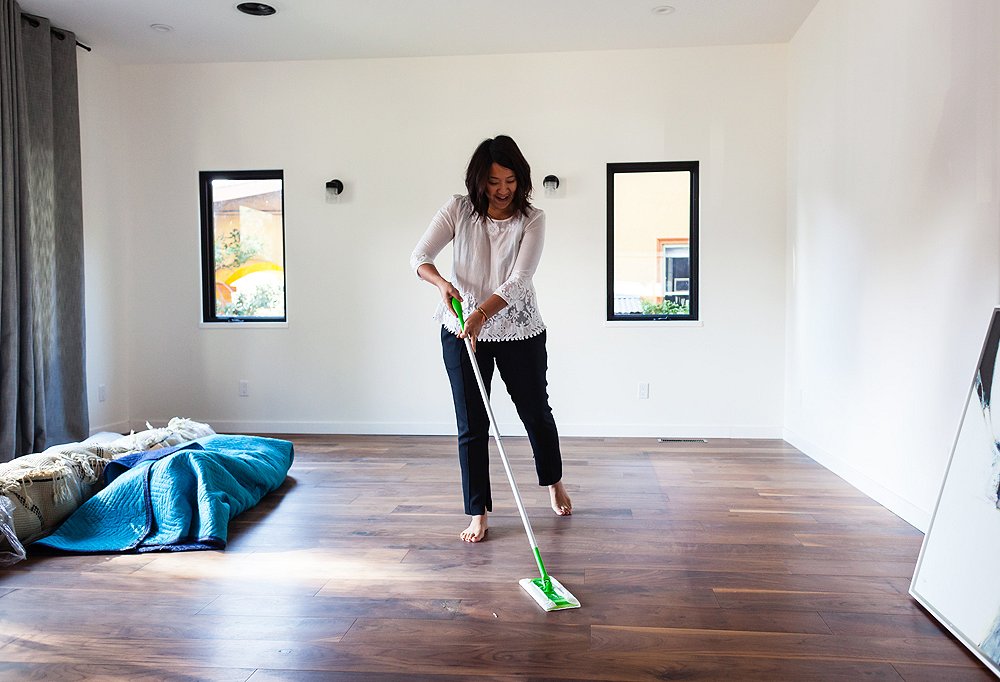 First things first: Erica went to town on her living room’s wood floors, getting them shipshape before all the furnishings were delivered.

8 a.m.
“On the first morning, I was rushing around trying to get the space ready. I was supernervous—more nervous than excited, actually. I kept thinking there’s no way this is all going to come together in three days, especially since I’d only seen things online and nothing in person!” 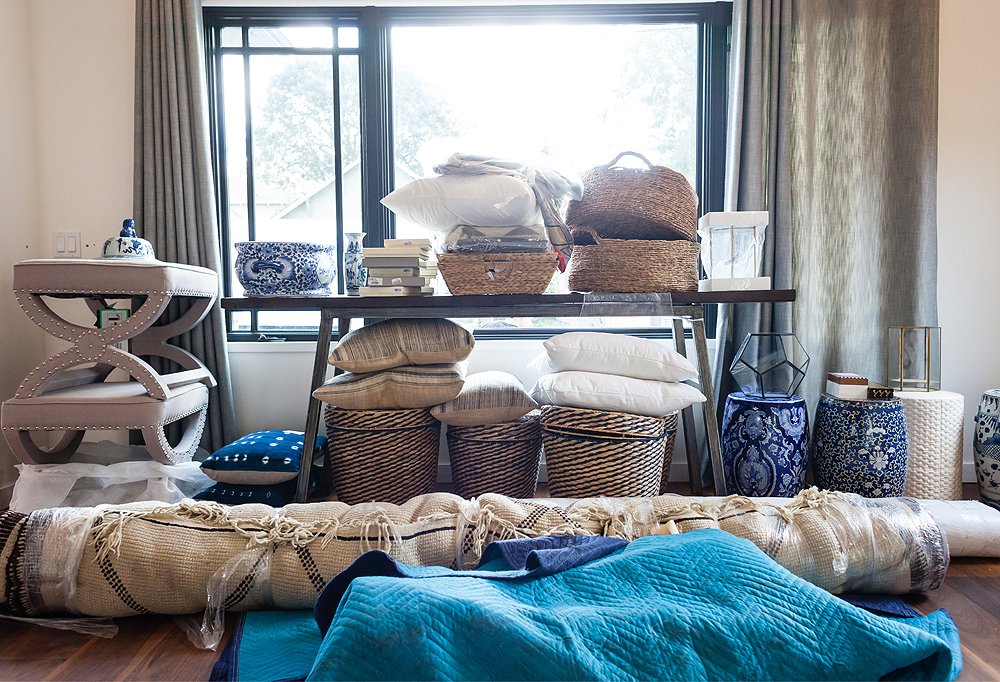 As they were unpacking, One Kings Lane’s Alex and Kate grouped similar items together—pillows with pillows, art with art—so that they could easily spy the pieces they needed as soon as they needed them.

11 a.m.
“It sounded like the delivery trucks might not come on time, so we were freaking out a little. But then they arrived! And everything went immediately from zero to 100. There were boxes and boxes, and crates and crates. Once Alex and Kate started unpacking and sorting everything I started getting really excited. I was running around going, ‘OMG, I love this! OMG, I love that!’” 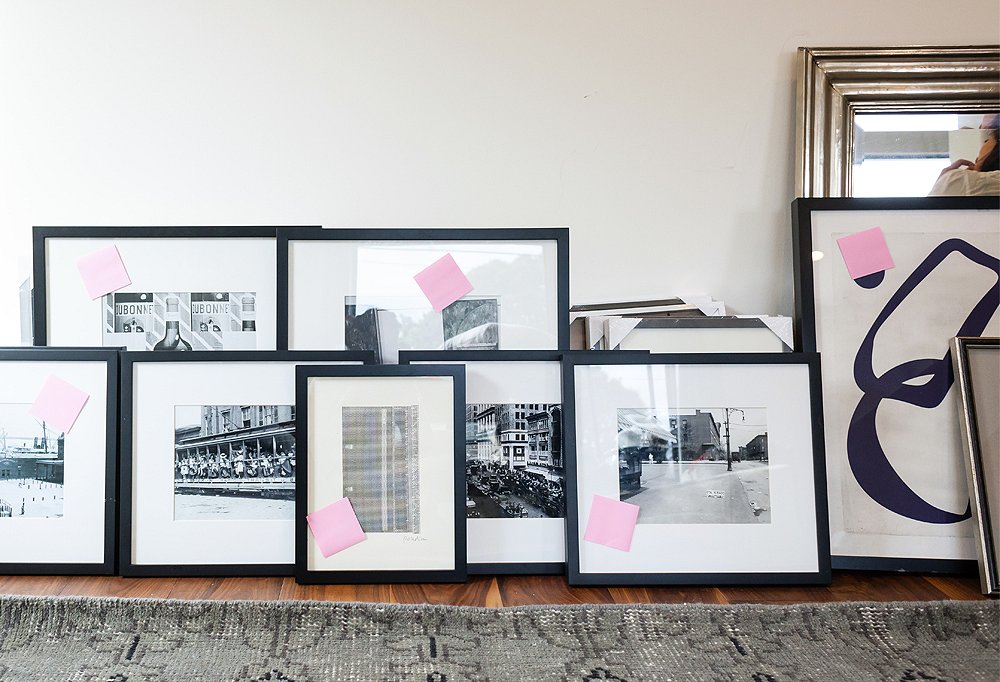 Stylist Alex thinks black-and-white artworks are perfect starter pieces for gallery-wall newbies because you can work in both vintage and contemporary photos and paintings, and the resulting mix looks timeless and insanely sophisticated.

When I was younger, more was better. Now that I’m a mom, less is more. 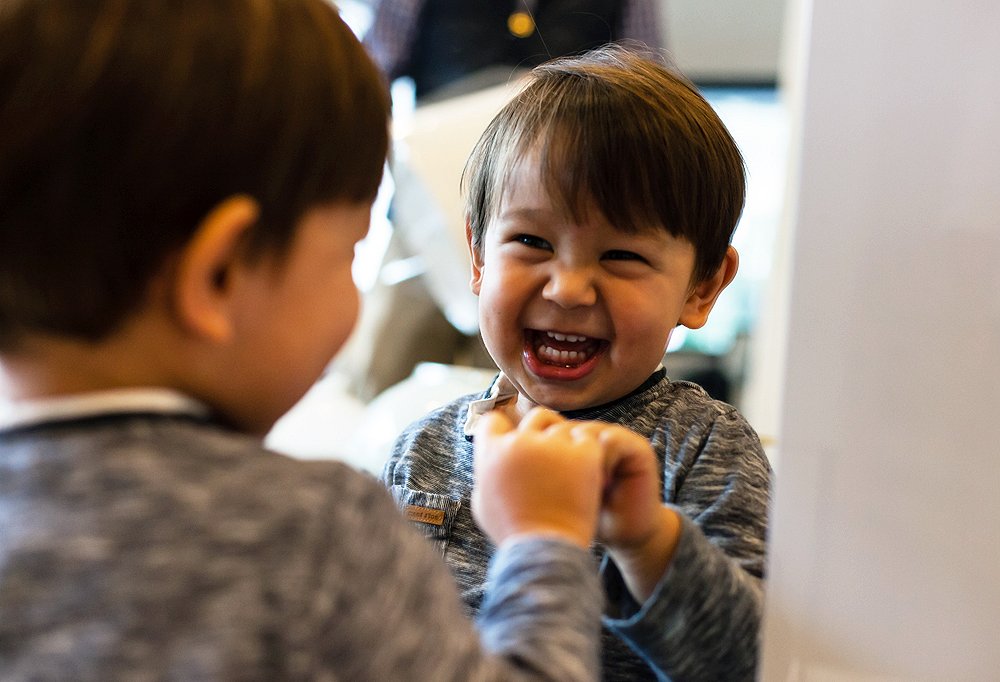 Noon
“Quincy is such an extrovert—he was saying hi to everybody and totally wanted to be part of the action. Our nanny took him to the park, then they came back and he started climbing on all the furniture. He’s very gentle, though; I didn’t worry about him getting hurt or hurting anything.” 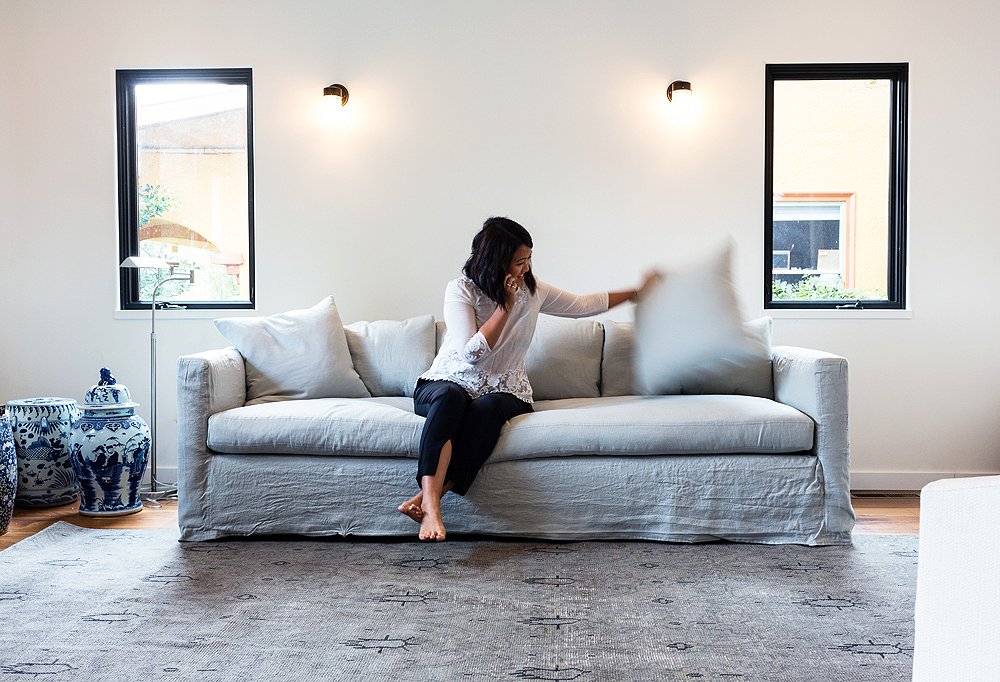 3 p.m.
“As soon as the couch showed up, I called my husband. That couch was probably the thing we were most worried about. He and I are both couch snobs. We’d just purchased a different couch several months before, and while we didn’t totally love that one, we didn’t want to wind up with something worse. But lo and behold, this one was perfect and awesome and comfortable.” 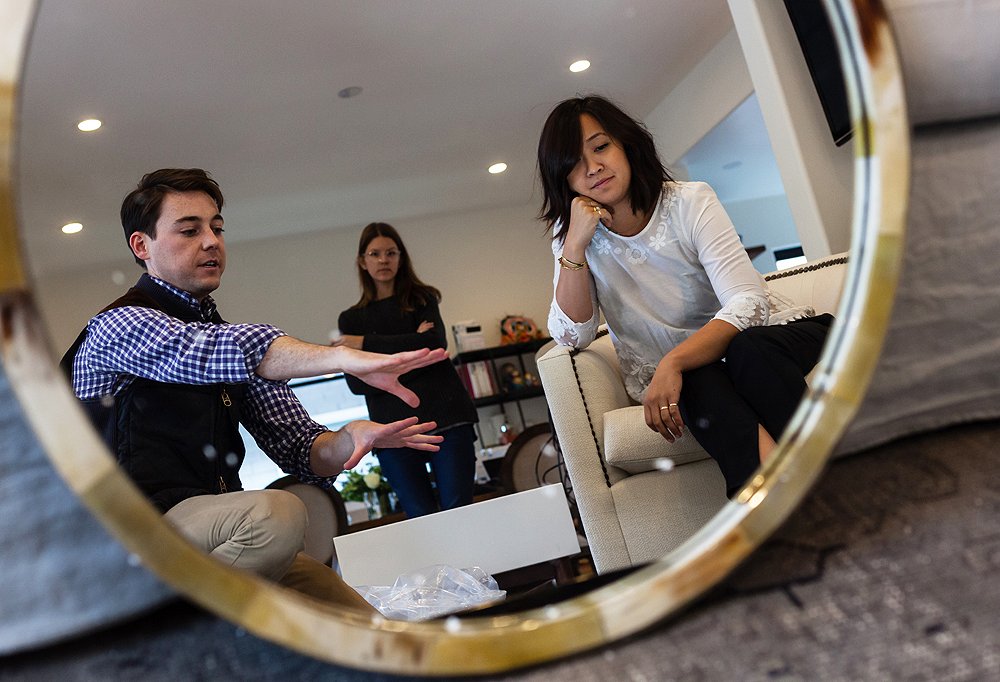 When Alex is designing a space, the first things he asks the owners are “How do you use this room? How do you want to use this room?” Both are questions anyone in the midst of redecorating should ask themselves.

4:30 p.m.
“I work from home—usually at my dining room table—so during the slow moments I’d be on my laptop, trying to let them do their thing, but then sometimes I’d pop over and interject myself into the situation. From the beginning, Alex had one layout in mind for the room, and by the afternoon of the first day, it had really started coming together.” 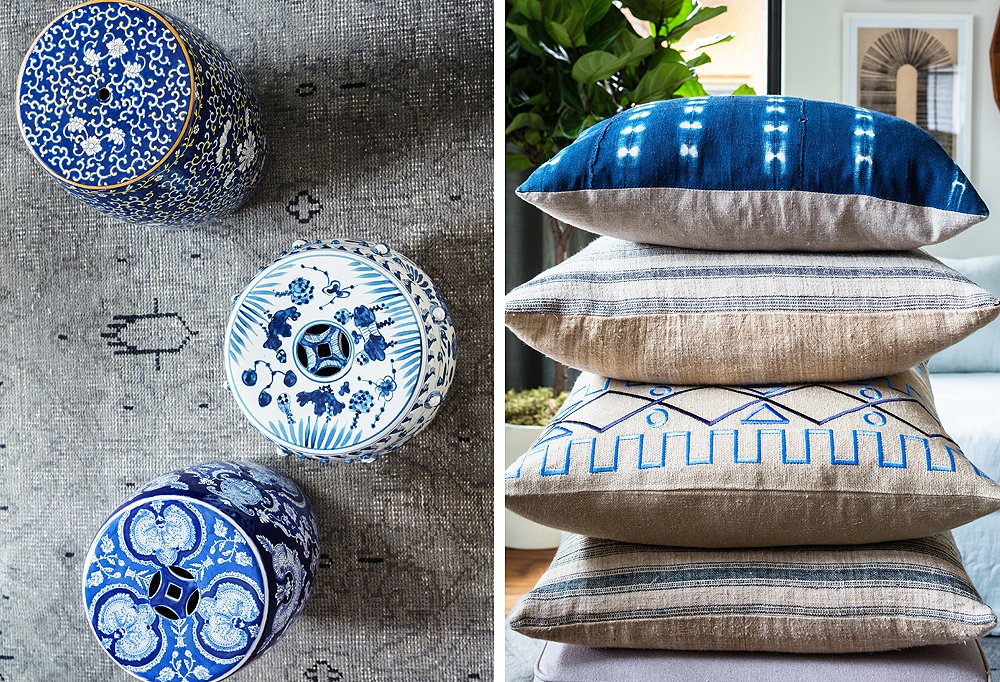 Thanks to their shared palette of blues, a trio of differently patterned garden stools riffs perfectly off shibori and French-grain-sack pillows.

11 a.m.
“I’d made it clear to Alex how much I love blue and white—Japanese indigo, delft pottery, Blue Willow china, and chinoiserie—there’s a blue underlayer throughout our whole house. So I loved seeing the palette coming together and totally working.” 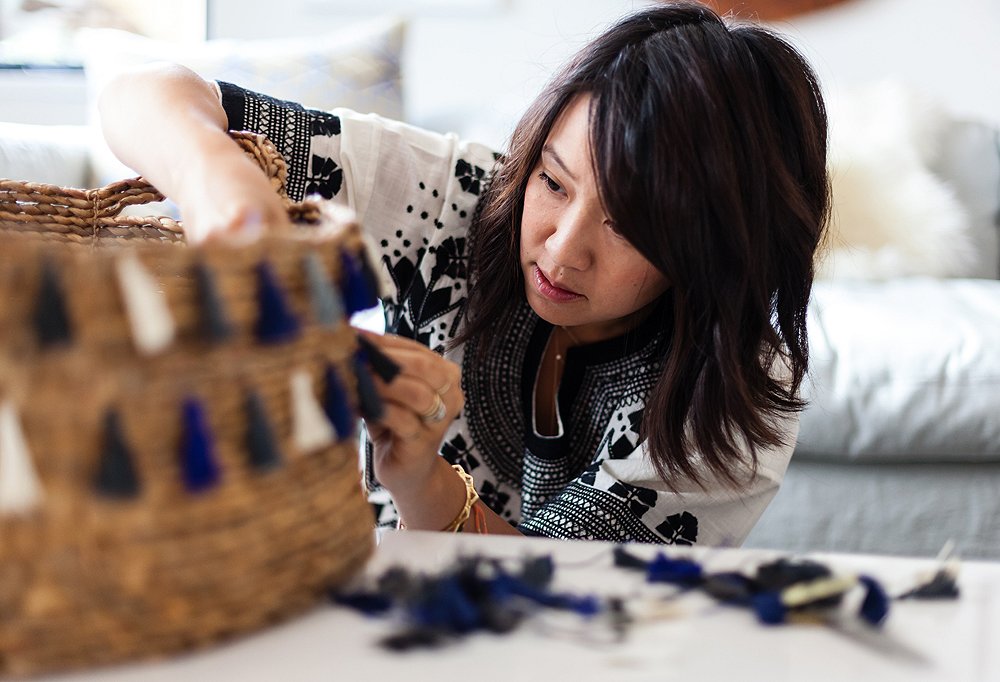 Alex planned for this basket to hold throw blankets, so adorning it with tassels was a fun way for Erica to pull in the colors of the room.

2 p.m.
“There’s a running joke that I say: ‘When in doubt, put a tassel on it.’ Earlier this summer I decorated a straw market bag with tassels, and it’s been one of my all-time favorite projects. That’s the first thing I thought when I saw this basket. It was a no-brainer.” 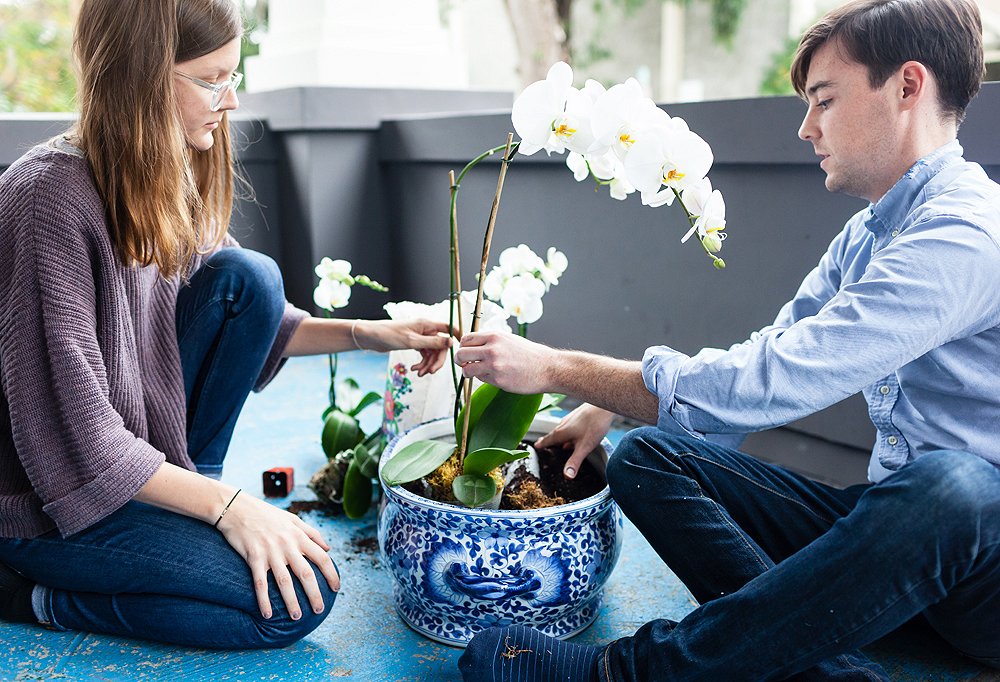 To create their orchid arrangement, Kate and Alex formed channels in the basin of a large chinoiserie tureen with Styrofoam, then tucked the orchids, still in their plastic containers, in the holes. They topped everything off with moss to hide the plastic.

5 p.m.
“I love indoor plants, but I have a major black thumb. Alex wanted to work in plants for a pop of color, so he gave me a fiddle-leaf fig tree, succulents, and a big thing of orchids that he and Kate put together. He told me that you just water the fiddle-leaf once every two weeks, and you drop an ice cube in with the orchids and succulents once a week. So easy! These plants and I were meant to be together.” 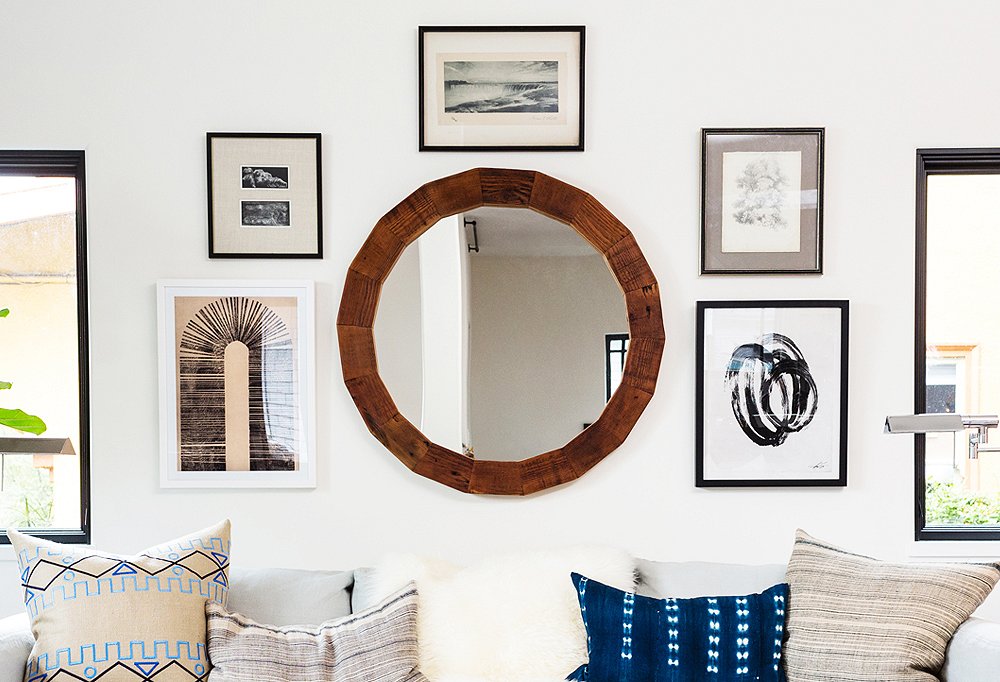 A mix of shapes—round and square—adds visual interest to this gallery wall.

10 a.m.
“Time for Plan B. We had a pair of sconces for this wall that just weren’t working out. The room has plenty of lighting, and the wall was better without them. So we put cover plates over the holes and hung art over them. I ended up loving the wall so much better that way.” 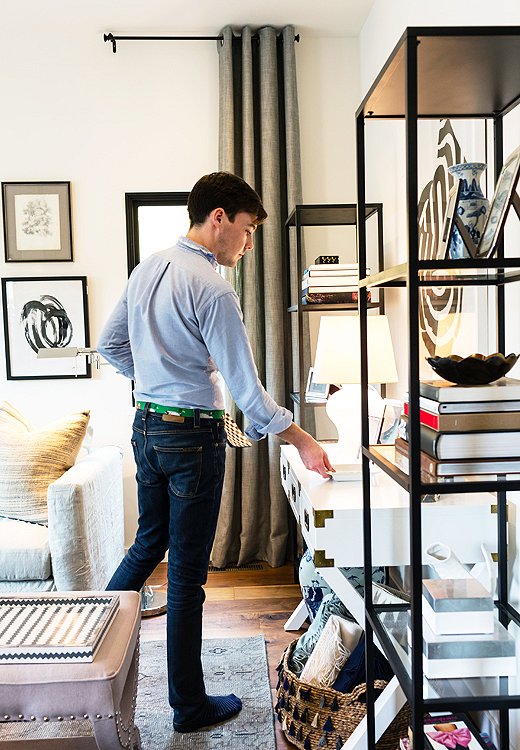 Alex loves using a desk in unexpected areas such as living rooms, where it can morph into a bar for entertaining when topped with a tray holding your favorite liquors. 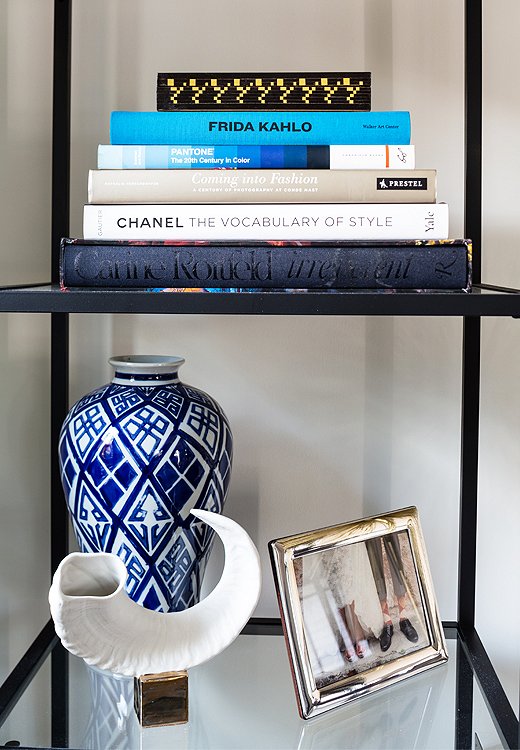 Blue-and-white ceramics are typically thought to be traditional, but mixed in with contemporary art and bone accents, they come off as fresh and edgy.

Noon
“Filling up the bookshelves was the best! Finally I had a home for all my books that had been in boxes in our shed for months.”

I love the juxtaposition of modern with traditional, rustic with sleek. 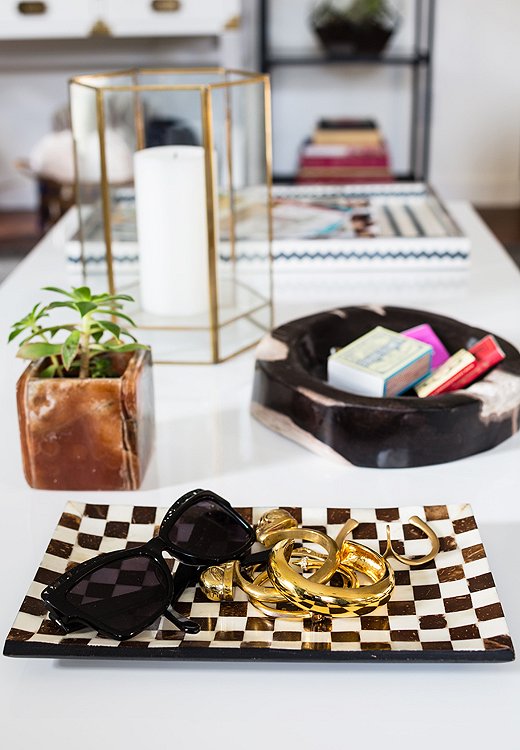 When it comes to surfaces, Alex is a devotee of trays, boxes, and grouping like items together to create a more organized space.

1 p.m.
“The last thing to do was add all of our personal pieces: putting Quincy’s toys in the baskets, setting family photos on shelves in pretty frames, putting my matchbox collection on a tray on the coffee table.” 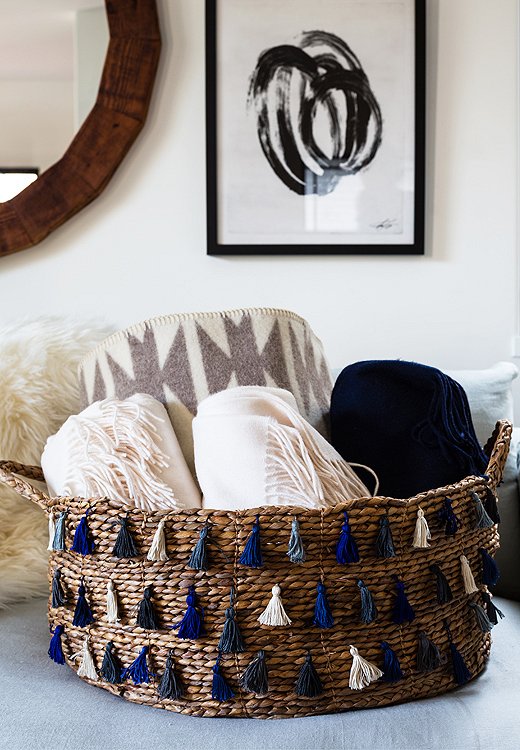 Rather than letting blankets languish in your linen closet (where they’ll never see the light of day) or tucking one around your couch (which might be too bold a statement), roll them up in a pretty basket so that they add a touch of color and are easily accessible on movie night.

… AND THE BIG REVEAL! 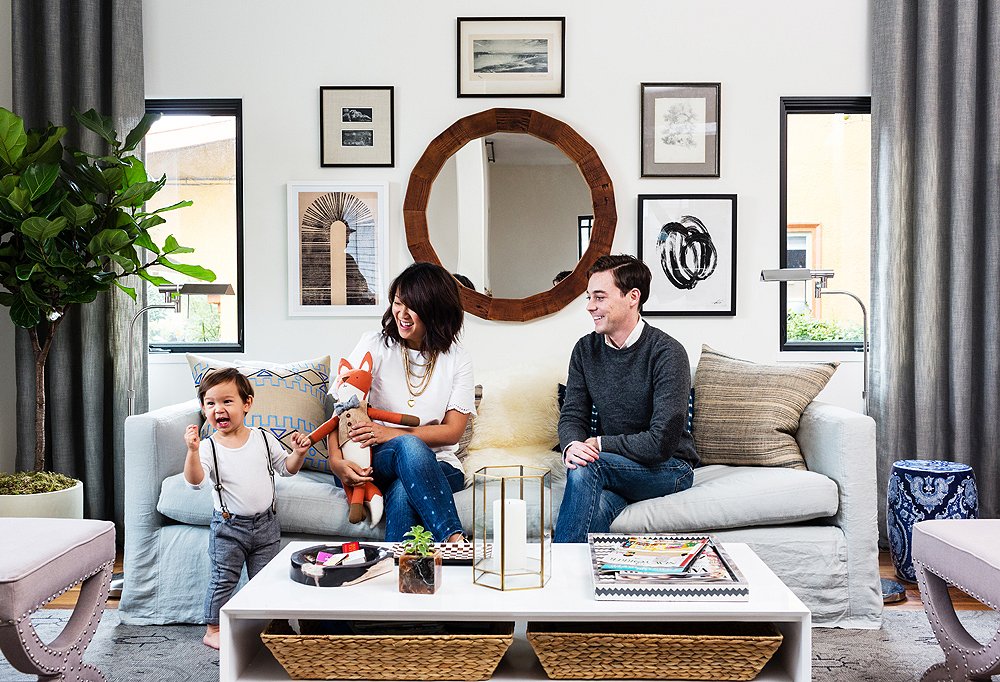 After three hectic days, Quincy, Erica, and Alex finally get to take a seat and take in all their hard work. 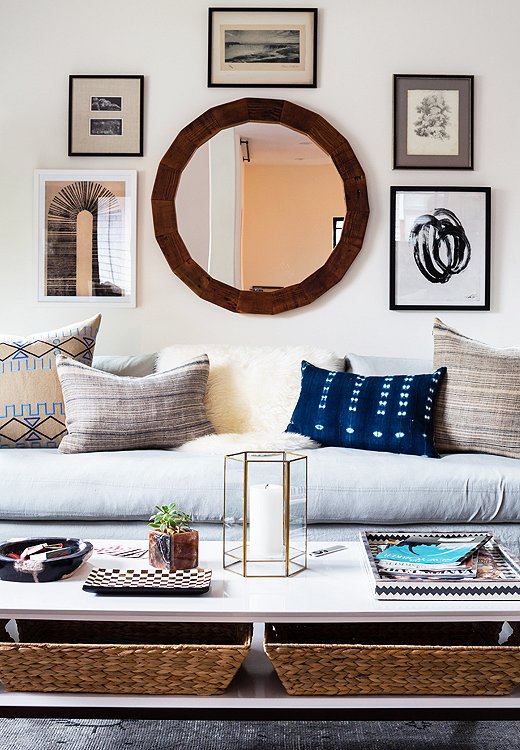 Key to Alex’s design was a mélange of materials, from the white lacquer coffee table to hits of wood to a blend of metals. 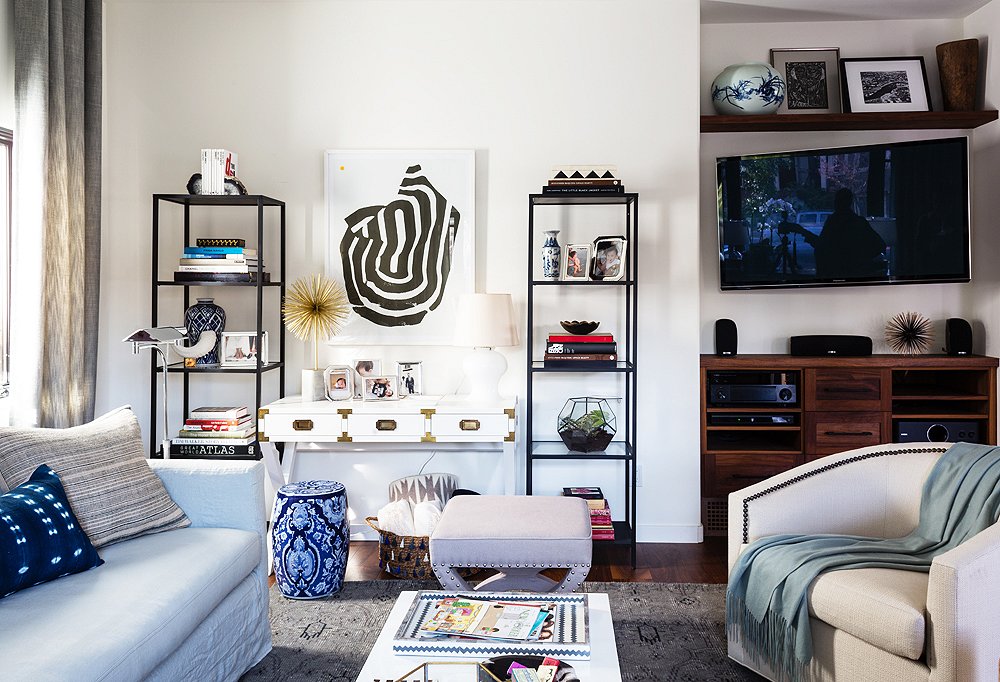 Alex based the height of the pieces in the room off Erica’s lofted TV set. He brought the drapes up and opted for tall bookshelves to balance them out, while hanging the artwork between a little lower to play with the eye. 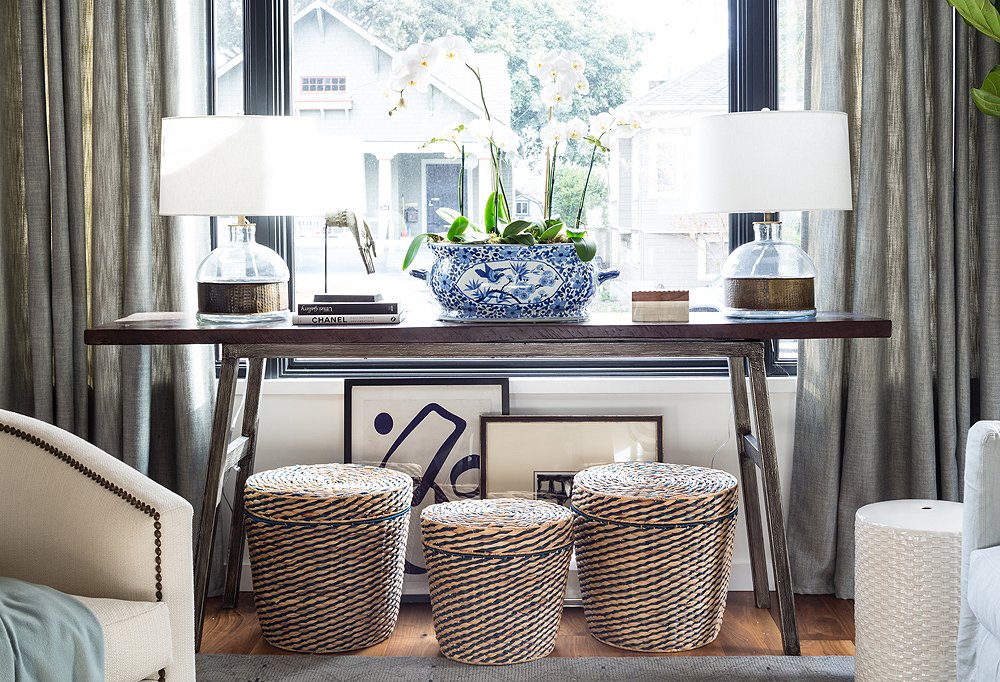 Alex’s motto is “leave no space undecorated,” so he tucked art and lidded baskets (a mom’s best friend) under the console to avoid a blank white space. 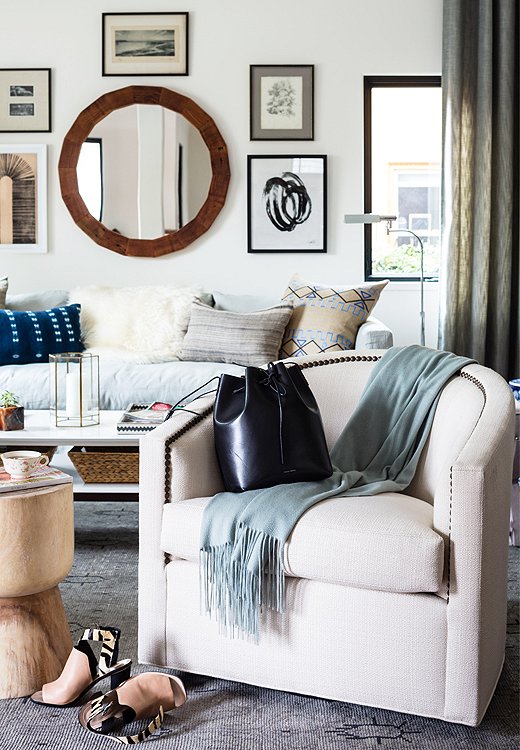 Now that all is said and done, Erica has enough seating for 10 people. Guests can pull up an X-bench, settle into the sofa, or have some retro fun in a pair of swivel chairs updated with nail-head details.

Now that we’ve settled into the space, it really feels like home. We are in this room morning, afternoon, and night. 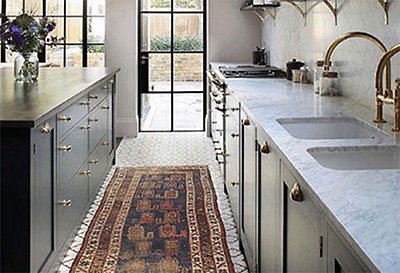 These standout pieces can really make a room 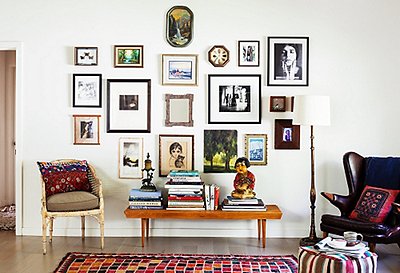 How to master the mix of old and new 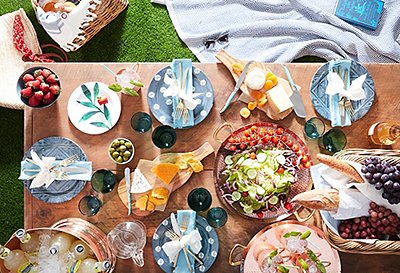 Why Melamine Tableware Is a Spring and Summer Essential

These fuss-free finds are warm-weather...