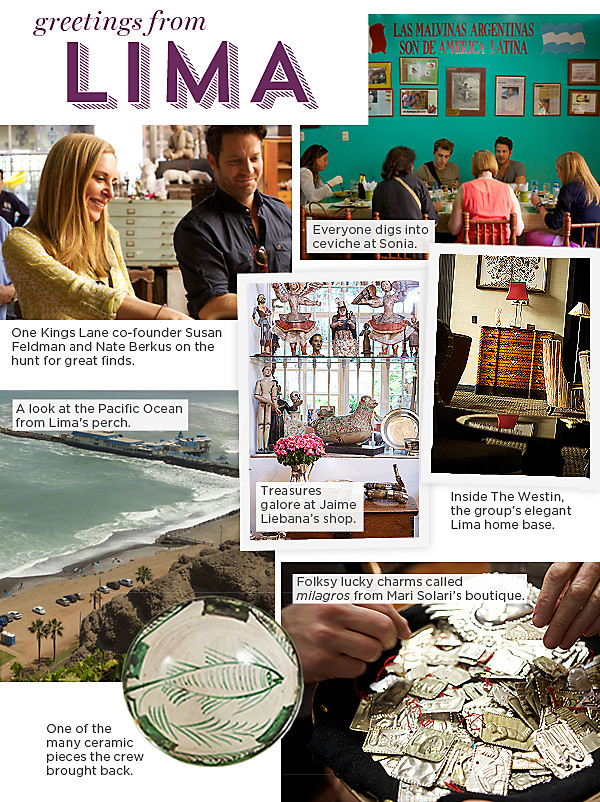 The capital city is an invigorating cultural mash-up, with history apparent on every corner and as many residents dedicating themselves to preserving the country’s traditions as there are others forging ahead with cutting-edge art, cuisine, and music.

For traditional handicrafts
Down a backstreet in the boho Barranco neighborhood, Las Pallas is the artisan shop-slash-home of Mari Solari where some walls are lined with ceramics while others are covered in textiles. Though she’s a North Wales native, Solari is like the giving tree when it comes to Peruvian folk-art insight, and you can easily lose an afternoon petting her dog, Brujo, and hearing tales of her remote handicraft-buying journeys.

For a little bit of everything
Also in Barranco and very close to the sea, Dédalo Arte y Artesanía is a labyrinth of Peruvian crafts: ceramics, blown glass, woodwork, stonework, jewelry, and a garden area dedicated to air plants and bonsai trees. Time your visit so that you can lunch in the quaint courtyard café.

For a haute take on Peruvian classics
Lima-born chef Gastón Acurio has restaurants everywhere from San Francisco to Madrid, but this, Astrid y Gastón, is his flagship that’s perfected its signature twists on Peruvian classics, from succulent lomo saltado to suckling pig. Be sure to stick around for dessert: caramelized bananas with coconut tapioca and goat-cheese ice cream, perhaps?

For arguably the city’s best ceviche
It doesn’t get any better than the ceviche at Sonia, where the fish is so fresh it needs a talking to. This charismatic little eatery, strung with fishing nets and awash in bright colors, has been owned for more than 30 years by the eponymous Sonia and her fisherman husband, Freddy, who fell in love when he was a fishing newbie and she a youngster cooking in her mother’s kitchen.

For South American molecular gastronomy
Gastón Acurio-disciple Virgilio Martínez is a new-school Peruvian chef whose restaurant Central in the Miraflores district is well on its way to foodie hot-spot designation. Expect high-tech techniques intermixed with traditional dishes in an industrial-chic space (with a solid bar if you like a good cocktail).

For elegant trappings and a central location
The skyscraping Westin Lima Hotel stands tall in the vibrant park-filled business and shopping district of San Isidro. Each of the contemporary, neutral-clad rooms has floor-to-ceiling windows and a bed so comfy it’ll be nearly impossible to crawl out of in the morning.

For cushy rooms and spot-on Pisco Sours
Also in San Isidro you’ll find the swanky Country Club Lima Hotel in a grand 1920s building that recalls gracious days past. Love a good Pisco Sour? This hotel is said to make the city’s best.

For that “sleeping in the pad of a wealthy friend” feel
In the artsy ’hood of Barranco, the B Arts Boutique Hotel is in a Belle Époque mansion that was the seaside summer retreat for a well-heeled family in a past life. Its design-forward rooms feature sky-high upholstered headboards, his-and-her sinks, and so much art, both contemporary and traditional, it could be a gallery moonlighting as a hotel. 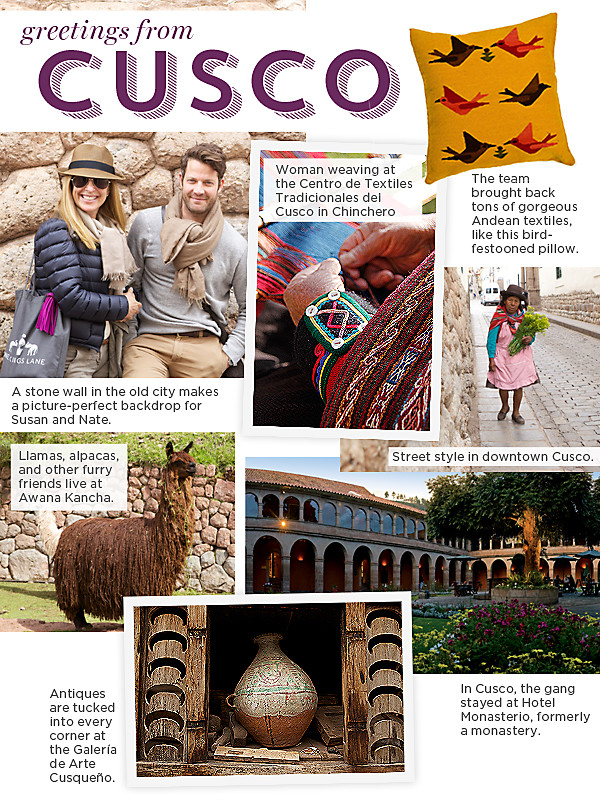 Not just a gateway to Machu Picchu, this high-altitude city deserves a closer look. It’s a wonder of Incan stonework colliding with Spanish antiquities, and it has rich ceramic and textile traditions that will make collectors weak in the knees.

For one-of-a-kind ceramics
Tater Camilo Vera learned his craft from a master ceramicist before setting up shop in Cusco, where he sells his beyond-gorgeous glazed wares. His designs are a fusion of colonial, Incan, and pre-Incan styles created with modern techniques developed with a chemist friend.

For a textile shop and museum
If you’re a textile lover, the Centro de Textiles Tradicionales has to be on your must-hit list. Both a shop and museum, it’s a wonderland of fabric where the entire process—from the spinning of wool into yarn to the snipping of the last stray thread—will unfold before your eyes. After the demo, choose from the textiles for sale, each labeled with the maker’s name and village.

For darling llamas and even more textiles
Another spot for the textile-obsessed is Awana Kancha, en route from Cusco to the Sacred Valley, which is dotted with ruins and tiny villages. Awana functions as both a mini zoo for Peru’s four types of camelids (llamas, alpacas, vicuñas, and guanacos) and a cultural center for weavers.

For a superchef’s take on Andean flavors
Gastón Acurio makes another appearance with his fabulous Cusco restaurant, Chicha, named for the region’s fermented-corn beer. The specialty here is Andean cuisine—think cuy (guinea pig, a staple), pork belly, and quinoas—and infused piscos whipped up into amazing cocktails.

For unbelievable atmosphere
Three nights a week a tenor and a soprano serenade diners at El Tupay Restaurant, within the Hotel Monasterio, where vaulted stone ceilings make for epic acoustics. Even if you can’t make it for the performance, come for food: locally sourced ingredients spun up in classic Continental dishes such as beef bourguignon.

For ruins right outside your window
Next door to the Koricancha Temple, where Incan stonework is juxtaposed with colonial architecture, the Palacio del Inka, a Luxury Collection Hotel, is a mansion reimagined as an elegant getaway. Its bar is an atmospheric spot to grab a drink even if you’re not sleeping over.

For a true taste of history
Originally a Spanish monastery built in 1595 on the remains of an Incan palace, the Hotel Monasterio is today a national historic landmark and Orient-Express property. Under vaulted ceilings with terracotta floors and walls this thick, rooms will transport you back in time. That is if a twilight stroll around the 300-year-old cedar in the stone-arch-edged courtyard doesn’t do the trick.

For a boutique getaway swathed in luxury
Inkaterra La Casona is a 16th-century Spanish manor house turned boutique hotel (there are only 11 suites) near the city’s main square. The hotel plays up what it calls Cusco’s “mestizo grandeur” with decor that ranges from vibrantly colored textiles on the beds to marble-clad bathrooms. Fun fact: Simón Bolívar, instrumental in liberating South America from Spain, lived here in the early 1800s. 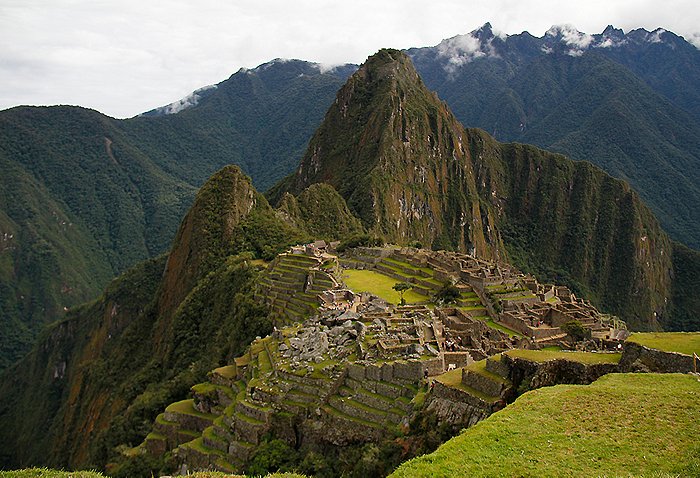 How to Hit Machu Picchu:
By Foot or By Train

This world wonder, a 15th-century Incan city crowning a mountaintop almost 8,000 feet high, is best reached on a hike or by riding the railway. Which best suits you?

BY FOOT
The most popular trekking route is the Inca Trail, which requires that you book well in advance with an outfitter like Llama Path or Enigma to secure a permit and a spot in a guided group. The four-day/three-night hike (pitching camp every night) is the granddaddy of Inca Trail hikes, but there are two-day/one-night options available as well. It’s also possible to take another route up like Salcantay, which is less crowded (though arguably less magnificent). One of Salcantay’s big perks is that you can hike between luxe lodges each day, cutting out the camping aspect entirely.

BY TRAIN
All trains lead to the town of Aguas Calientes, and from there you (and everyone) must hop on a bus up to the actual ruins. You can stay in Aguas, but hotel pickings are slim, so you can do what our group did instead: Book a night at Tambo del Inka, a Luxury Collection Resort & Spa in the Sacred Valley, which has its own private train station, so you can essentially roll out of bed and get on the train with little to no hassle. 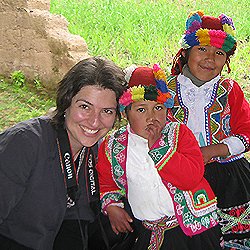 Our Peru Insider
The fabulous Marcella Echavarría, a Colombian-born, NYC-based writer, photographer, teacher, and artisan expert, created our itinerary and traveled with us. She’s plugged into crafting cultures around the globe (she’s been to Peru countless times), and is so knowledgeable and passionate about her field that Nate Berkus says he never wants to travel without her again. She works mainly with companies, but is willing to craft bespoke trips for anyone interested in the high-end handmade. 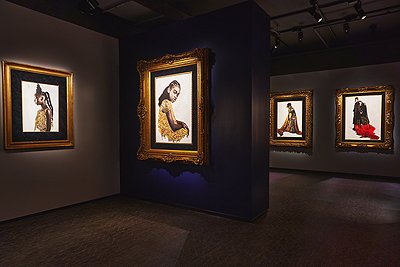 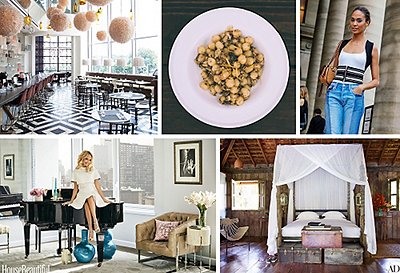 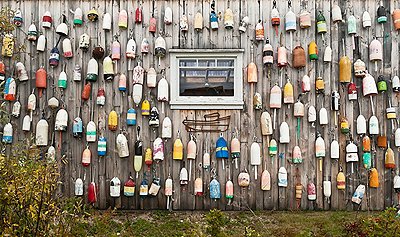 A Guide to the Antiquing Scene in Kennebunkport, Maine 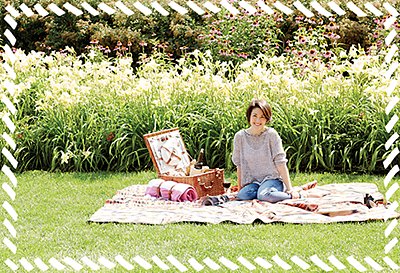 The Design*Sponge Guide to the Perfect Picnic 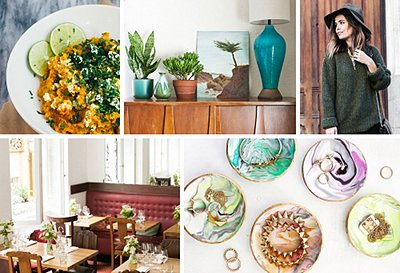 The most fashionable Tumblr on the web, swoon-worthy design with a bohemian twist, and... 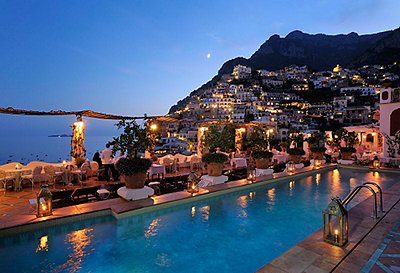 The Insider’s Guide to the Amalfi Coast