Any designer knows that the best clients are the ones with whom you work more than once. When a young couple needed someone to decorate their first home in Chappaqua, NY, Chauncey Boothby was there. When they needed help updating it in time to welcome their first child, Chauncey was there. When they needed help turning their barely finished basement into the ultimate party spot, Chauncey was there with blueprints, hard hats, and plans for a wine cellar. 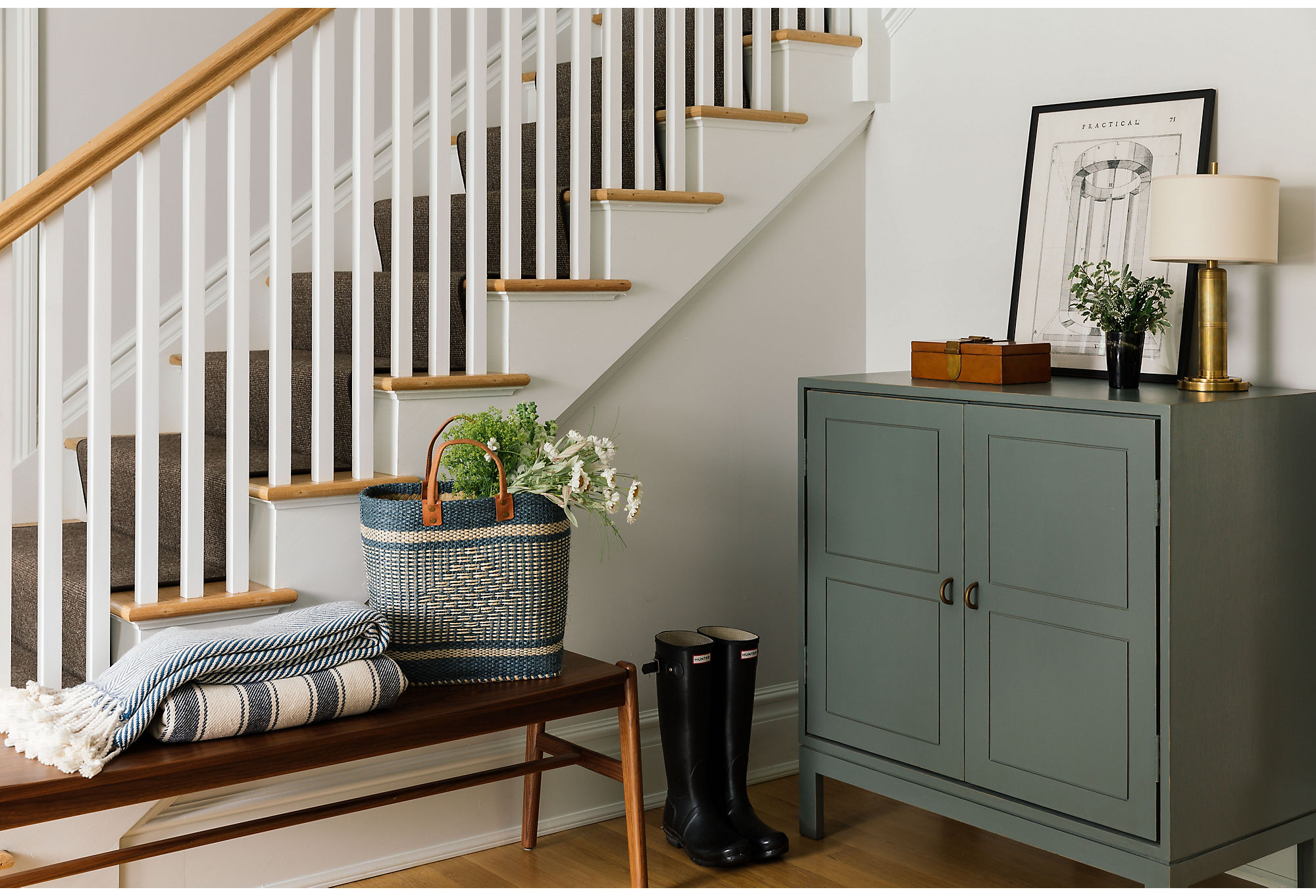 A quiet moment in the entryway is accented by a Visual Comfort table lamp and industrial-inspired art. Chauncey attempted to seamlessly blend the couple’s love of industrial and their desire to soften its hard lines throughout the home.

“When I first met the clients, they were a young couple living in a New York City apartment,” says Chauncey. “They were taking a big leap to move out to the suburbs and bringing along only a handful of items with them.”

As New York City living doesn’t exactly prepare one to fill an entire multistory family home, Chauncey was tasked with furnishing the place. Her biggest challenge was to get the homeowners to expand their taste. They were partial to one style and one style only: a sort of aged, rustic-meets-industrial look that was specific to just a handful of brands. “I gradually started introducing them to other vendors, sometimes slightly similar, other times wholly different, and created a real mix,” she says.

The mix she came up with is best defined as new traditional. “What I wanted to create here was a fresh, youthful look, one that took some classic, traditional elements and added a bit of edge to them and made them feel new and totally livable,” Chauncey says. “It’s sort of like mixing a classic pair of ballet slippers or loafers with some ripped jeans.” You can see the ripped-jean side of the design in the modern silhouettes. The ballet slippers come in small traditional finishes and colorful details.

The whole home took a few years for Chauncey to complete. Working in phases, she tackled the main living spaces first: the master bedroom, the living room, the dining room. Then, when the couple was expecting their first child, they called on Chauncey again to help usher them through this new stage of life. 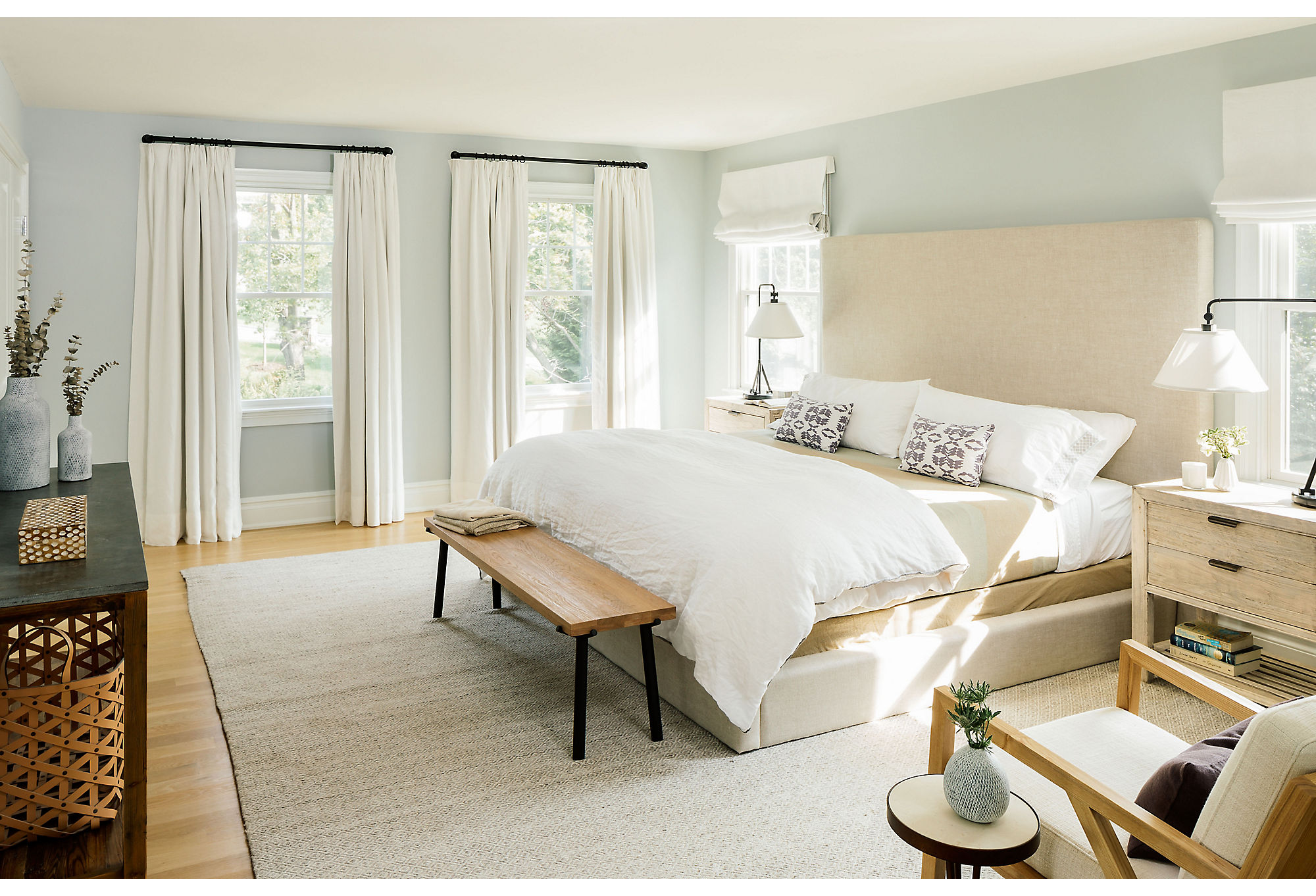 The couple gravitated to more-industrial elements, so Chauncey set about softening that look in the master bedroom with simple white drapes and a muted palette. The room is painted in Horizon from Benjamin Moore. Table lamps from Ralph Lauren Home serve as bedside lighting. 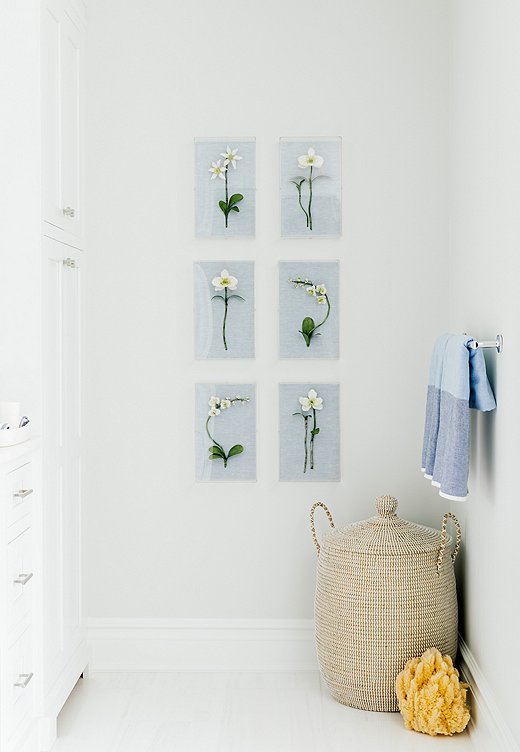 Three-dimensional floral art provides symmetry in the master bath. The jute basket provides texture and warmth to the space. 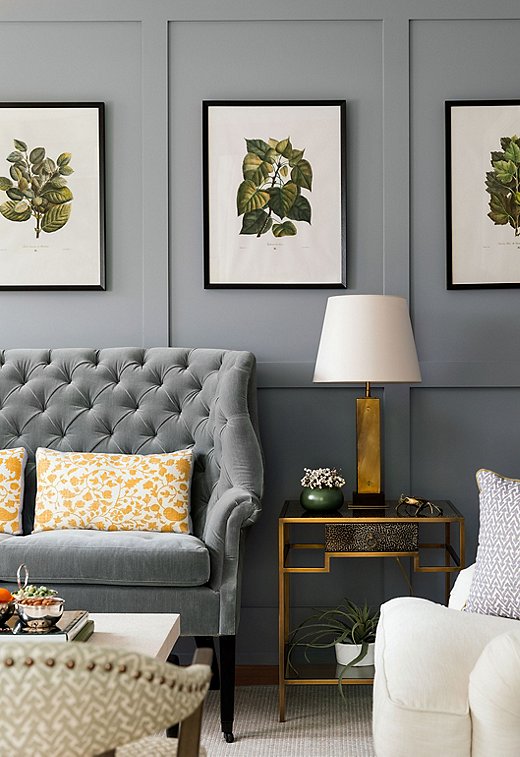 The choice to go dark in the formal living room was actually client-led. “I usually have to do a lot of arm-twisting when it comes to strong colors,” says Chauncey. She chose to lighten the space up with whites, marigolds, and greens. 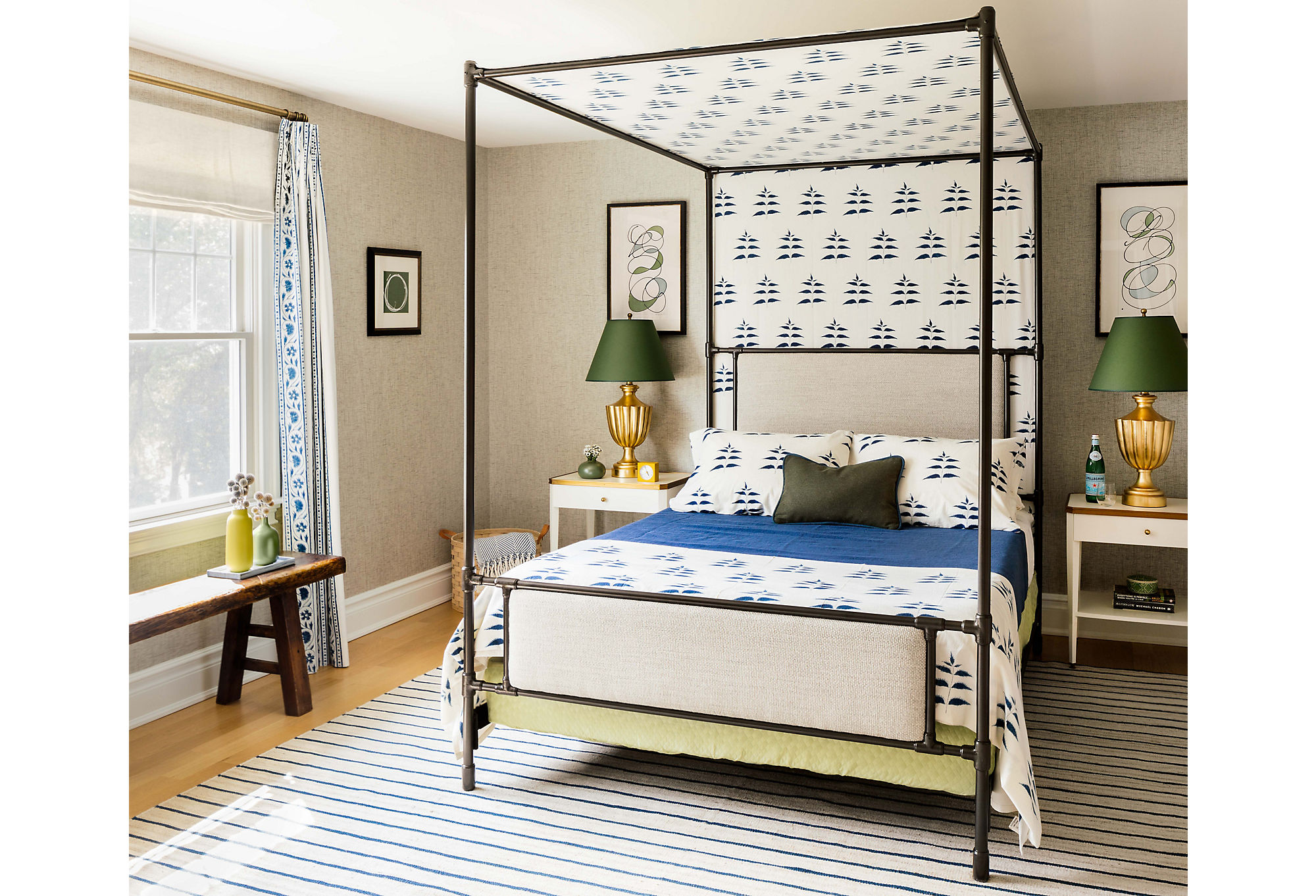 Pattern takes center stage in the guest room. The bed is draped in fabric from Les Indiennes. Gold table lamps add a pop of metallic brilliance. 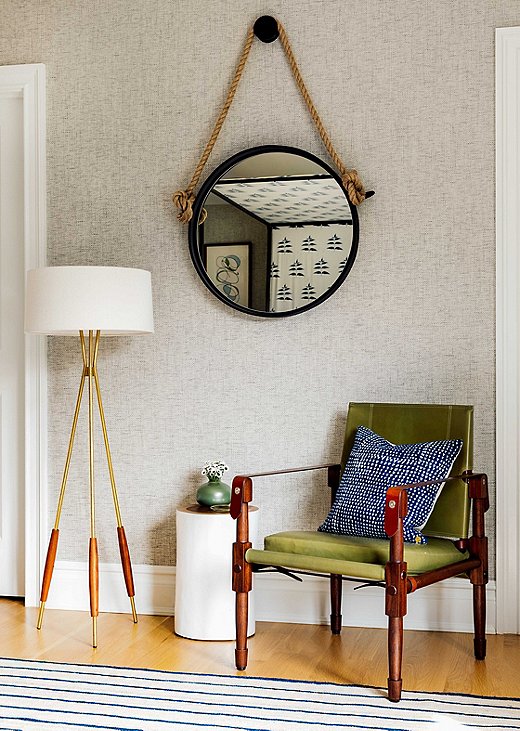 Opposite the patterned bed is a simple scene. The tripod floor lamp‘s warm legs accents play well with the leather accents on the accompanying campaign chair. 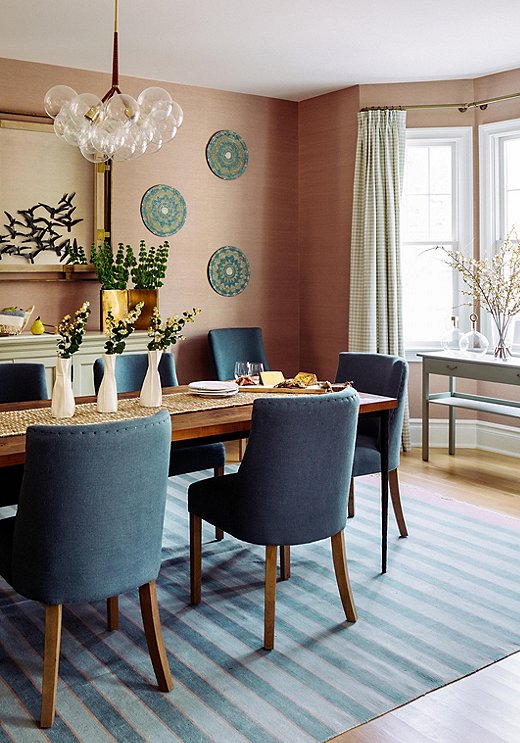 “I wanted to find a color that could hold its own,” says Chauncey of her choice to go pink in the dining room. The grass-cloth wallpaper adds color with subtle elegance. The decorative bowls serve as wall art loaded with texture. 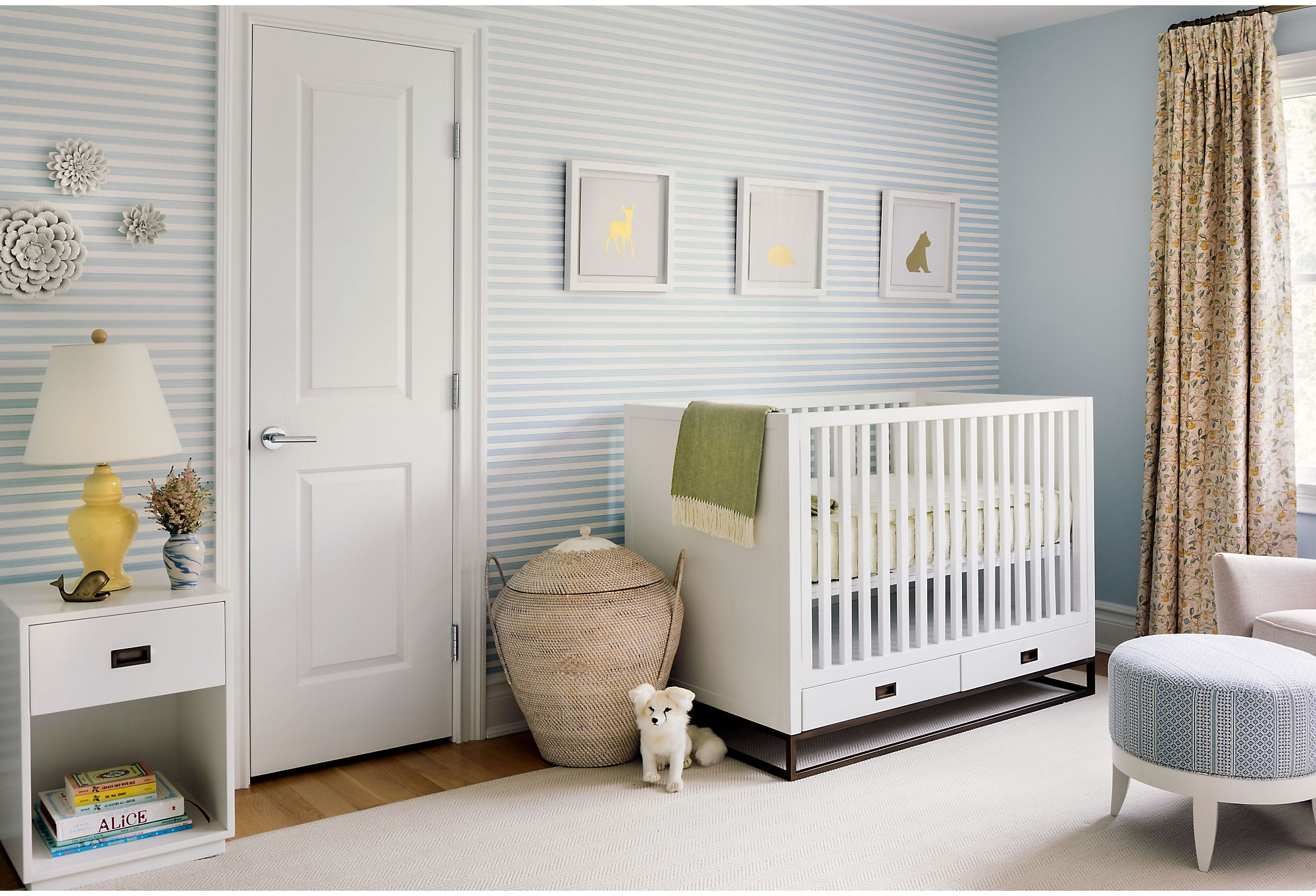 “This room was originally an empty box when I started with them,” says Chauncey. “When they found out they were having a baby girl, they wanted a nonpink nursery that felt chic but also with woodland creatures.” 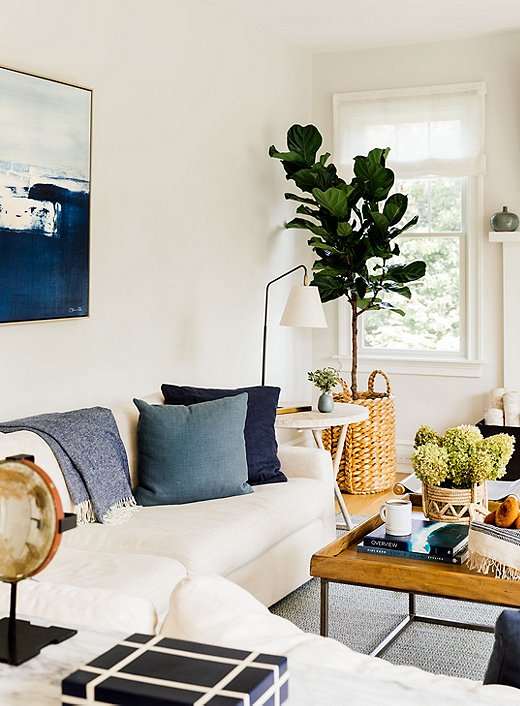 Chauncey went with layered neutrals and touches of blue in the family room. Woven jute elements throughout the room punch up the texture and modern vibe. 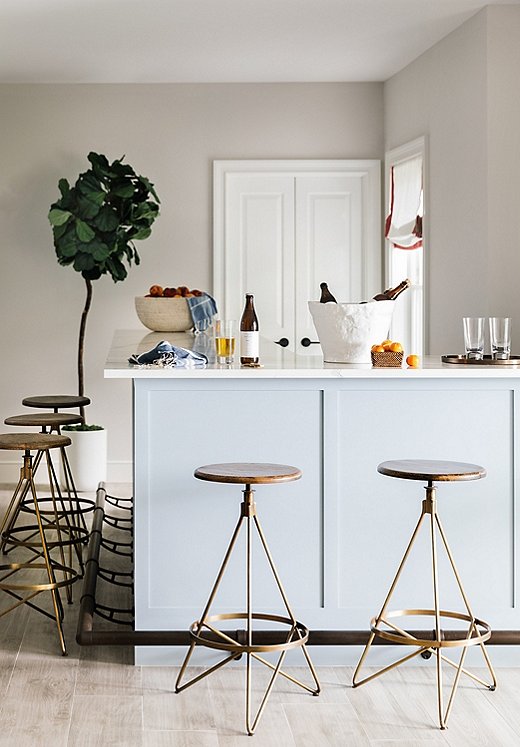 Chauncey worked with the couple to transform the basement into an ultimate entertaining space. It includes a wet bar, a pool table, and a wine cellar. 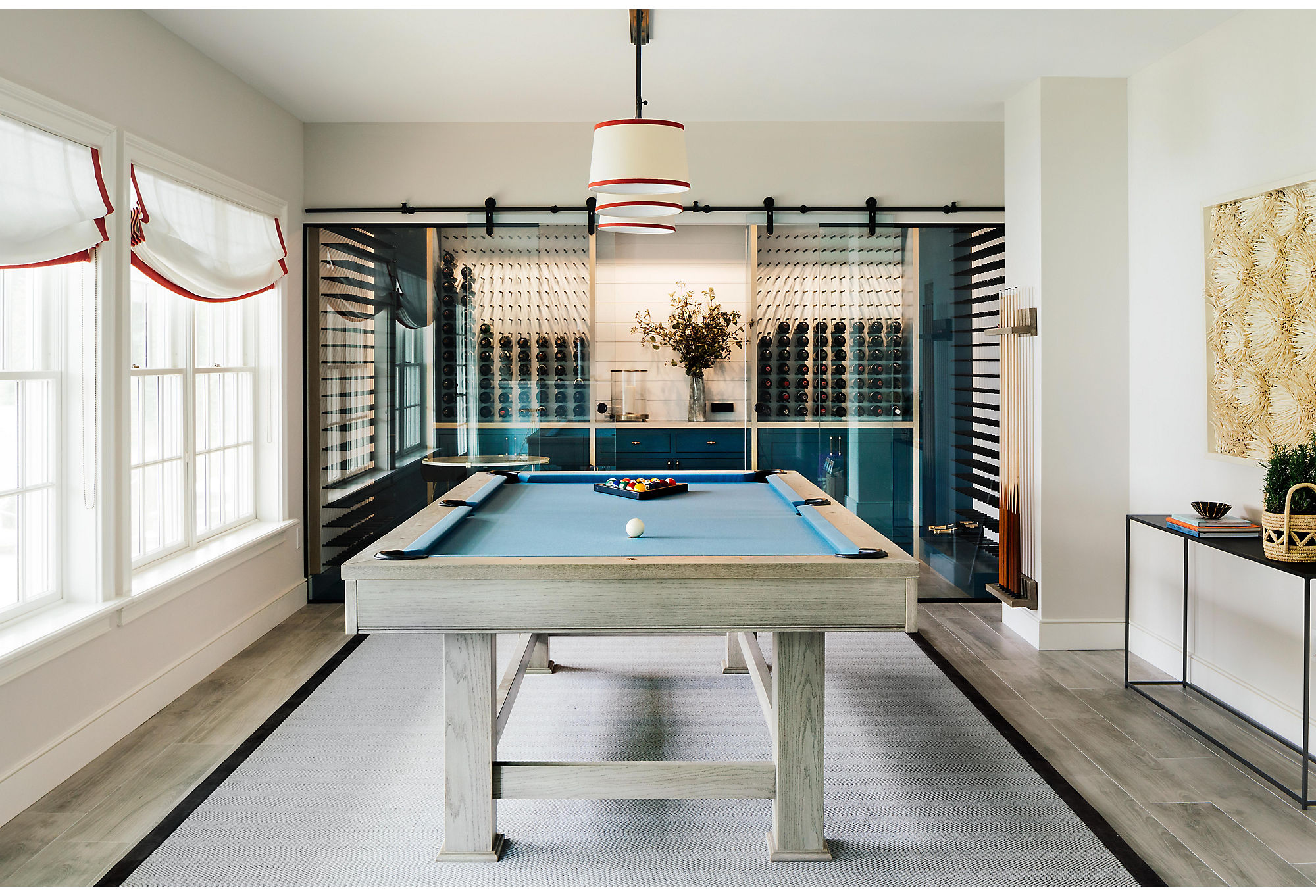 Don’t be fooled into thinking the redesigned basement is just a glorified man cave, warns Chauncey. “It was really the wife who was the driving force of this space,” she says. “I don’t know what you would tag the ‘she shed’ version of a wine cellar, but this is it.” 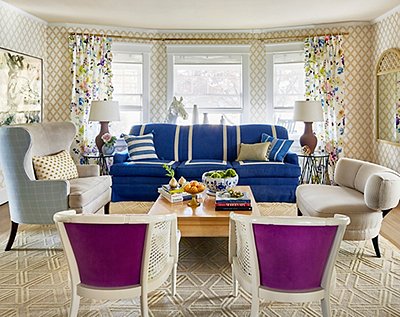 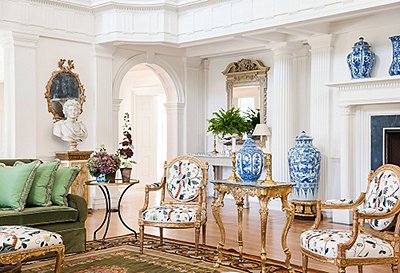 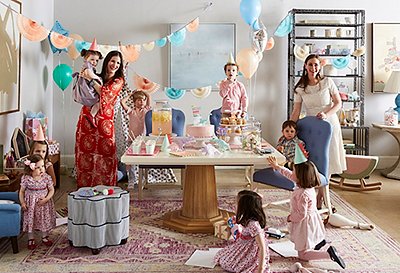 Tips and tricks for pulling off a fun-for-all party 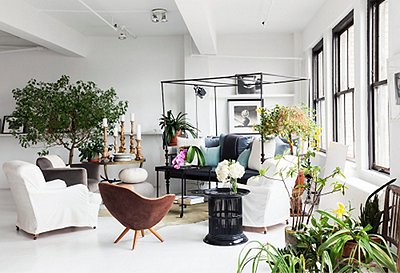 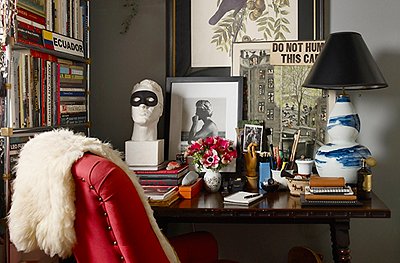 Best of 2018: Six Stylish Homes Sure to Inspire

Revisit a few of our favorite abodes