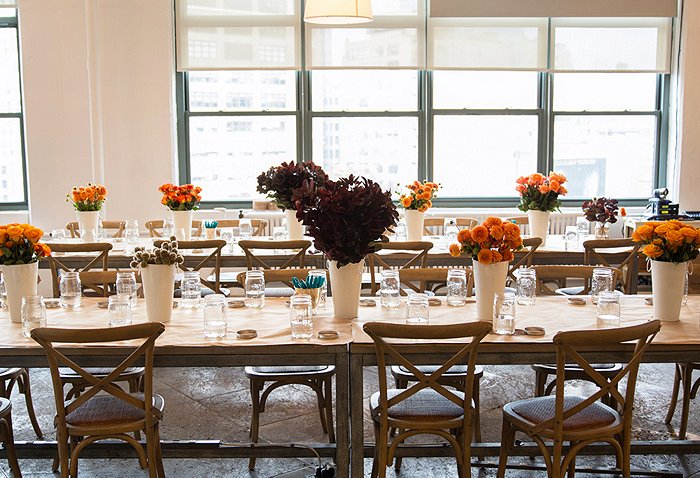 In the morning, Meghan took a trip to New York City’s flower market to select the blooms, and landed on orange-y roses and dahlias, round scabiosa pods for texture, and deep purple burning bush for foliage. For vases she chose Mason jars (“Jamali Floral & Garden Supplies has great affordable vessels if you’re buying en masse,” she says), and set everything up on twin long tables in our light-filled kitchen. 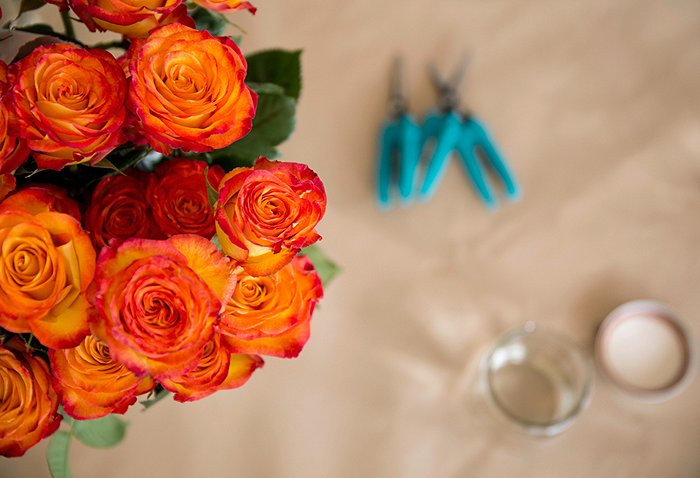 All the tables got big buckets of blossoms, and flower shears to be shared between arrangers. “The problem with scissors is that they don’t cut all types of stems,” says Meghan. “But you can find shears at any hardware or gardening store.” 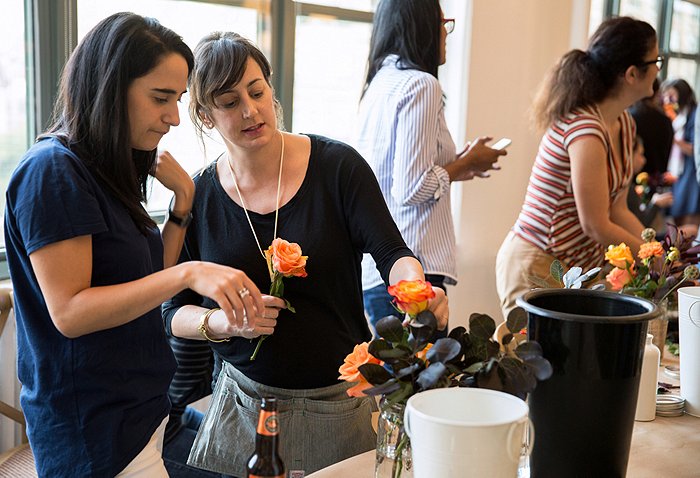 As everyone worked on their arrangements, Meghan (middle) worked the crowd. “People mainly struggled with two things,” she says. “The first was balance—for example, too much foliage for the size of the flowers—and the second was only looking at the arrangement from one angle, when really, it should be beautiful from 360 degrees.” 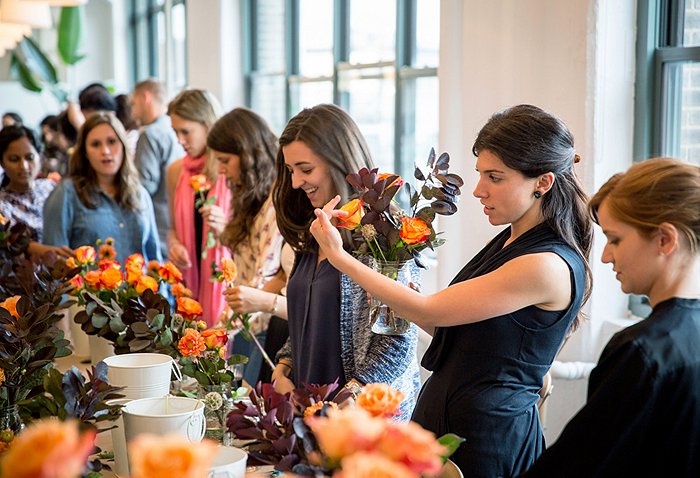 “I trust the visual rule that objects look better in odd numbers,” says Meghan, “so I suggested that people stick to three or five flowers, with one acting as the focal point, and the others supporting it as accents.” 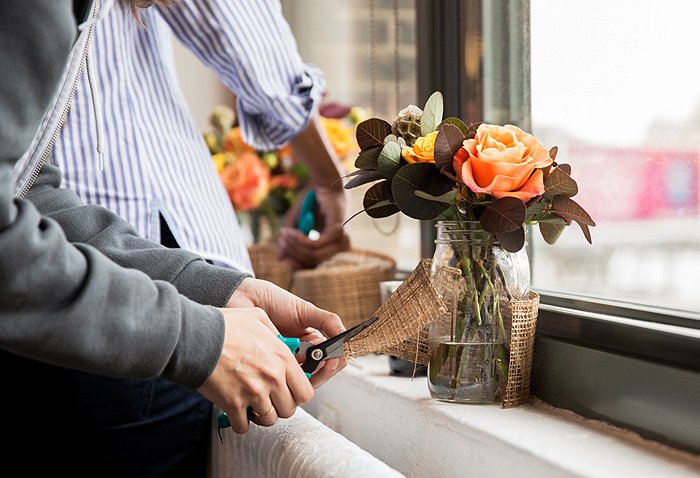 Meghan encouraged everyone to wrap a piece of burlap around their arrangement. After snipping it to size, they secured it with a hot-glue gun. “It was one more seasonal touch,” she says, “and I wanted to bring everyone’s attention to the receptacle—it’s not just about what’s inside the vase, but the vase itself.” 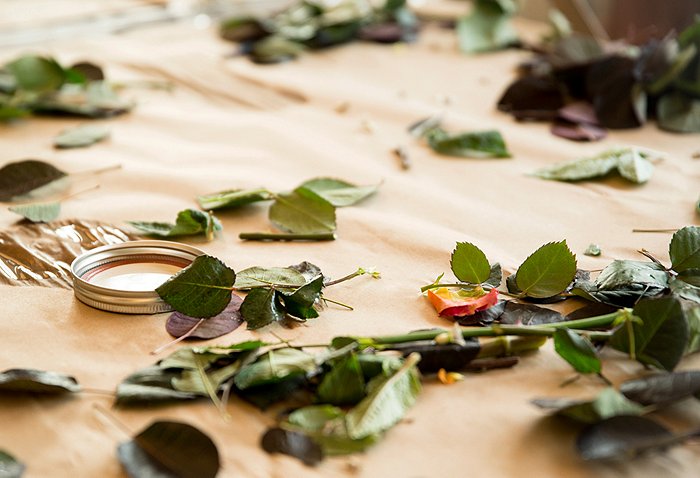 Even the discards were photogenic!

How to Build a Better Arrangement 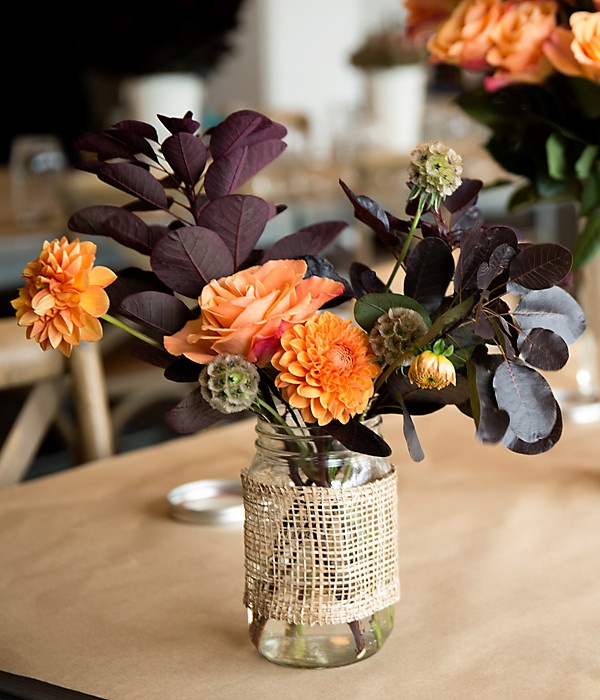 One Kings Lane’s very own flower-arranging guru shares the Cliffs Notes version of her class.

1. When buying flowers, keep your palette tight. “Stick to no more than three or four colors for cohesiveness,” says Meghan. “I opted for fall shades, but as we move into winter, maybe it’s more about whites and off-whites, or rich merlots and purples.”

2. As for what and how many to buy, “the rule I go by is pick one show-stopping flower—here that was the roses—and a couple other options for accents—the dahlias and scabiosa pods—plus a green or leaf for texture and volume,” says Meghan.

3. “Before you start arranging your flowers, they’ll need a little prep,” says Meghan. “Strip the leaves to about an inch above the rim of your vessel, and cut the stems at an angle.”

4. When you’re ready to create your arrangement, first build a base shape with greenery, then add in your showpiece flower, and finally accessorize it with accent blooms, keeping some taller than the showpiece, and letting others gracefully drop down below it.