One Kings Lane
All Articles Travel

Nantucket is a place so storied its nautical-preppy cliché runs the risk of overshadowing its true beauty: its rugged coast; its weathered, shingle-covered buildings; its vibrant gardens. The true nature of this New England island was not lost on the owners of boutique hotel Greydon House. Real-estate-investor brothers Alexander and Jeremy Leventhal and partner Elliot Gould’s Faros Properties had never opened a hotel before. But having summered on nearby Cape Cod as kids and fallen in love with Nantucket as adults, the trio knew they wanted their contribution to the island to feel authentic.

They also saw an opportunity when they began visiting the area frequently. Local hotels “didn’t feel special,” says Alexander. “There was nothing that felt like I was on Nantucket. They were either really traditional, ordinary, or too modern, like I was in Miami. We wanted to create a hotel with an atmosphere that was set within the culture and climate of Nantucket.”

When they came across a former sea captain’s house right off the wharf in town, they knew they had the spot. The partners pulled in New York’s Roman and Williams, a firm known for creating richly layered, modern-meets-classic interiors for the likes of the Standard Highline and Ace hotels in Manhattan, and four years later opened the doors to Greydon House. The result is a hip-meets-historic boutique hotel whose carefully chosen collection of antiques weaves the story of Nantucket’s past piece by piece. 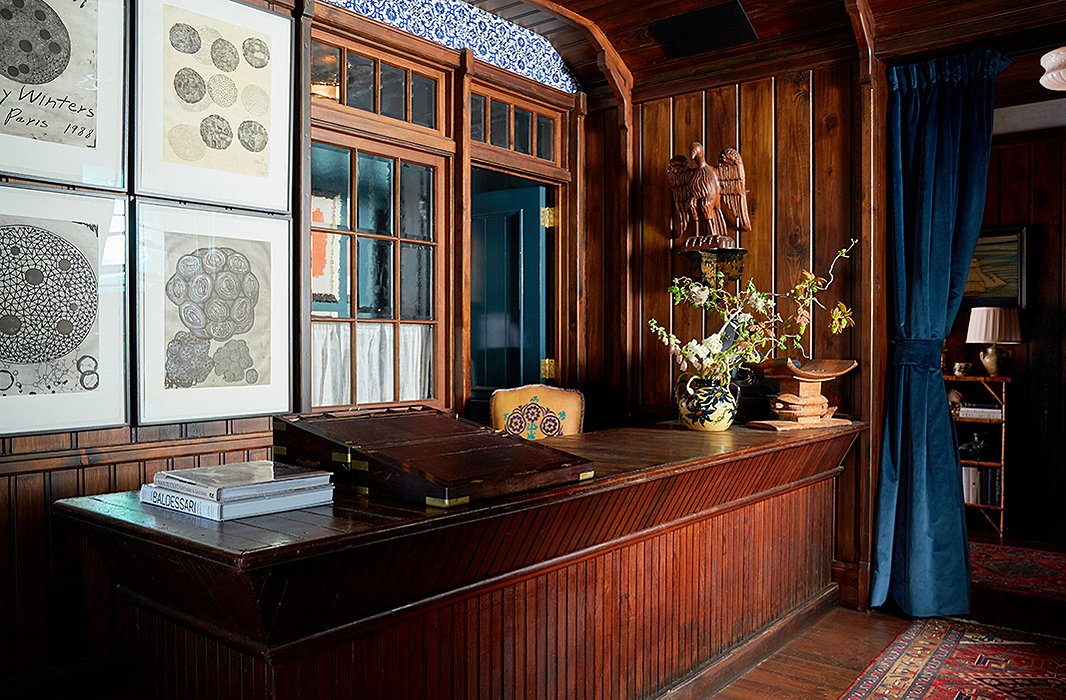 A Slice of History

With Nantucket’s old town protected from teardowns by its historic designation and little land available for new builds, the 18-room Greydon House became the largest building project undertaken in Nantucket’s historic district in the past 75 years. With the help of local architect Matthew MacEachern of Emeritus, the 1850s Federal-style home the partners purchased was moved from its original wharf location to a downtown corner where a garage once stood. The move allowed for the creation of a covered porch on one side and a patio below, ideal for evening cocktails and outdoor dining. MacEachern also designed an addition, a three-story mansarded structure that gives the finished hotel a perfectly imperfect character, as if it had been added to over decades rather than months.

Nantucket landscape artist Marty McGowan partnered with Roman and Williams to fashion window boxes and gardens that complemented the interior color palette and felt a bit “wild and untamed,” just as it might have in the 19th century. The plantings incorporate varietals from Europe, Asia, and the Caribbean, as well as vegetables that find their way into the hotel kitchen. 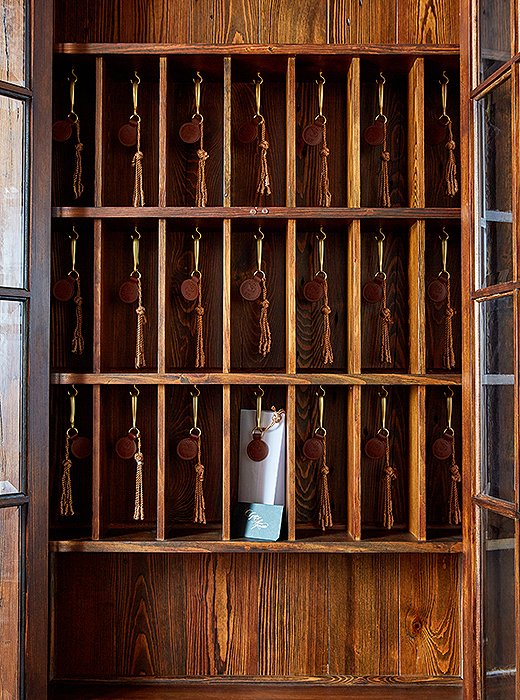 Guests are greeted at reception with a European-style key cabinet, a relic that provides atmosphere and a handy spot to sort mail. 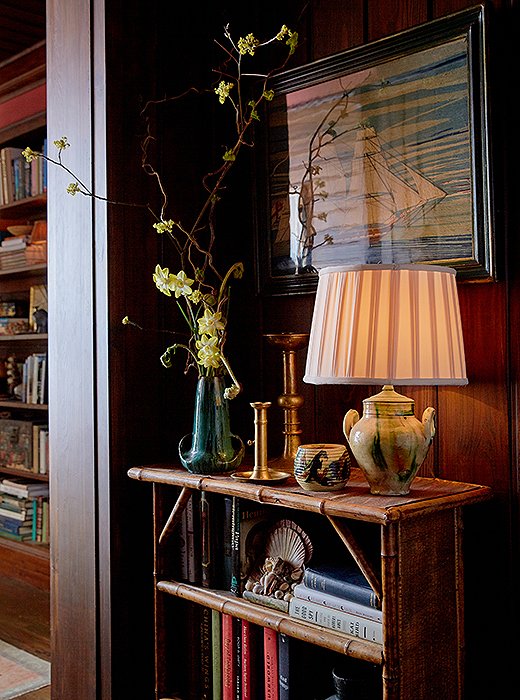 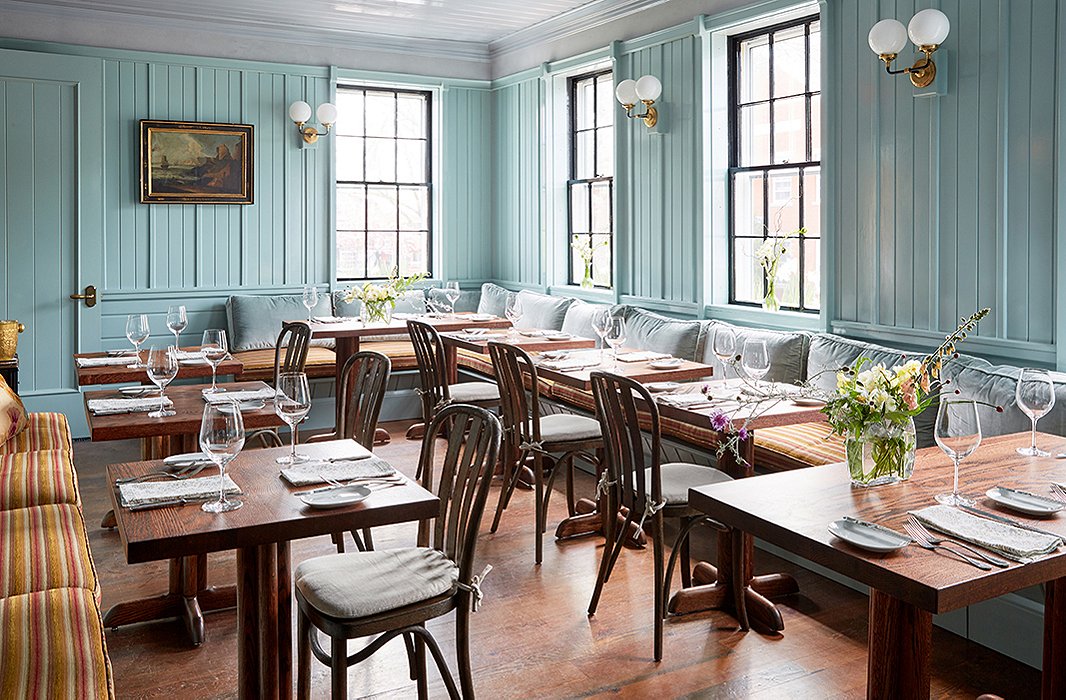 The Lore of Nantucket

For most of the 18th and 19th centuries, Nantucket was the most prosperous whaling port in the world. Designers Robin Standefer and Stephen Alesch of Roman and Williams tapped into that rich history when conceiving of a narrative to guide the Greydon House interiors, imagining the life—and the dwelling—of a well-traveled whaling captain.

“These sea captains would go all over the world and bring back things to put in their homes,” says Alexander. “We wanted to bring our guests into that world.” To that end, the designers sourced eclectic antiques and accessories from Asia, Europe, the Middle East, and of course, local shops. 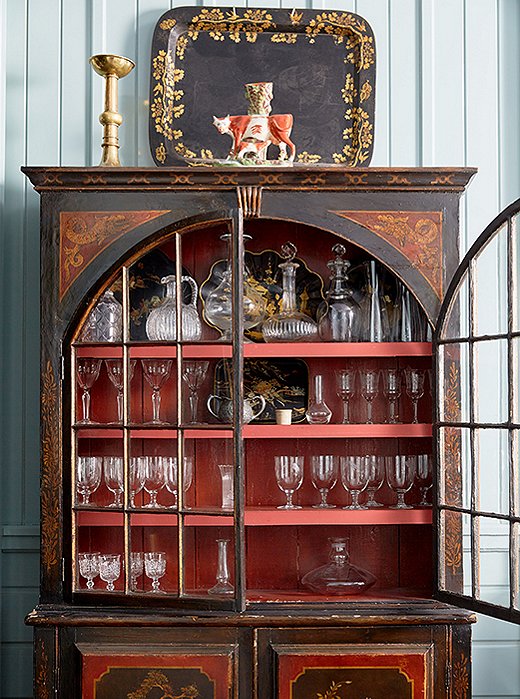 These sea captains would go all over the world and bring back things to put in their homes. We wanted to bring our guests into that world. 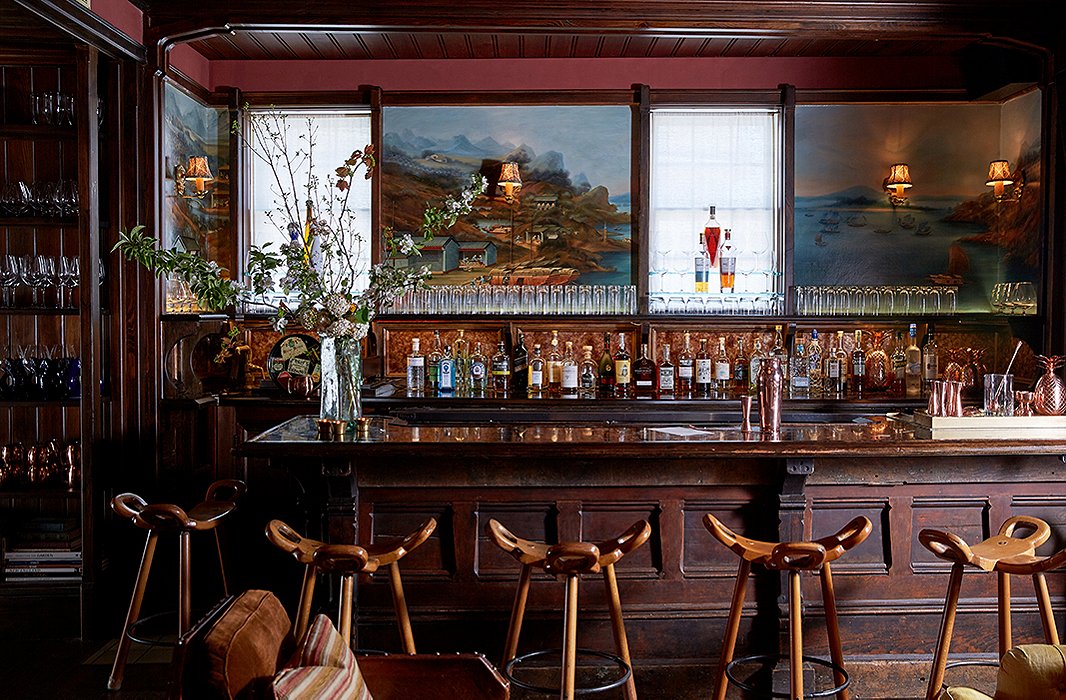 The paneled bar was sourced from the Midwest and topped with a wood-trimmed honed-marble slab. The scenic panels behind the bar, by New York decorative painter Dean Barger, take inspiration from a painting in the Peabody Essex Museum and depict historic Chinese merchant ports. 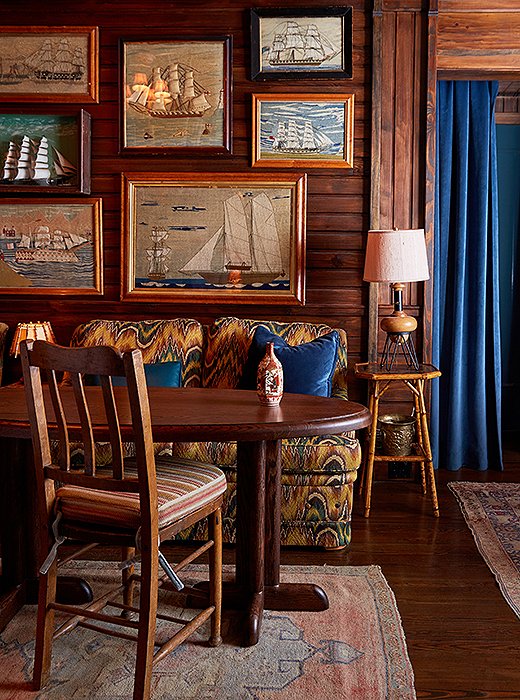 In the bar’s lounge, flame-stitch-covered sofas make an unexpected counterpoint to a salon-style display of nautical artwork, including framed wool-stitched scenes, or “sailor’s woolies,” found at Nantucket antiques shops. 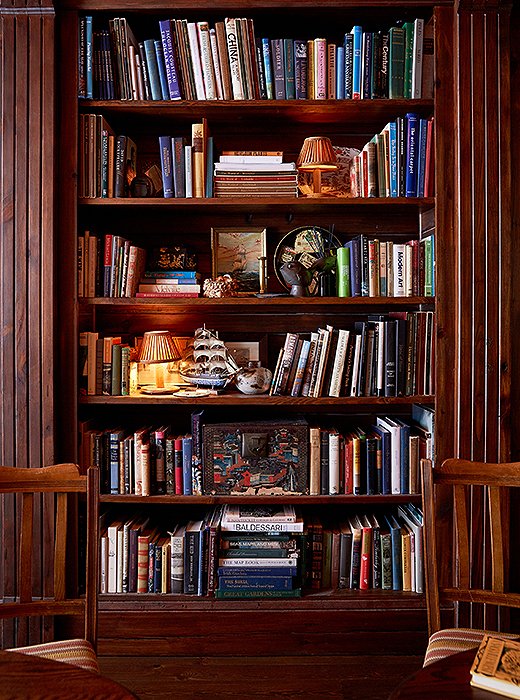 New York-based Roman and Williams designed Greydon House with a fictional whaling captain in mind—a wealthy character who picked up artworks, books, and furniture on his far-flung voyages. “They knew what we wanted to create hadn’t been created before and so it needed a story,” says Greydon House co-owner Alexander Leventhal.

Creating Atmosphere, One Piece at a Time

The mix is the magic at Greydon House. Just as new and historic architecture blends seamlessly in the hotel’s final structure, modern and Old World elements come together in its interiors. At the front desk you’ll find European-style keys hanging on hooks alongside a collection of contemporary abstract prints. In a bedroom suite, a retro rotary phone sits alongside Indian-inspired block-printed bedding by John Robshaw and an antique table with inlaid Arabic lettering. It’s a careful balance of history and modernity, with a light touch of kitsch—and the result is an array of truly memorable spaces. 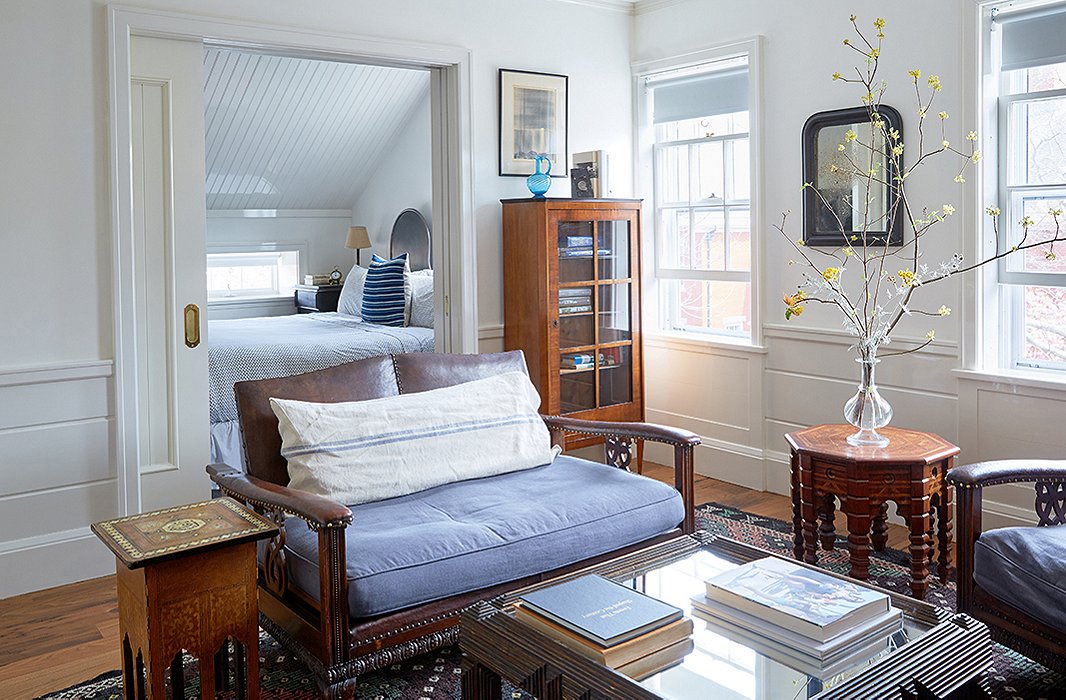 Rooms feature wood paneling in varying widths, adding character and helping to blend the old and new structures seamlessly. Here, a seating area in one of the hotel’s two suites features a medley of American and Middle Eastern antiques. 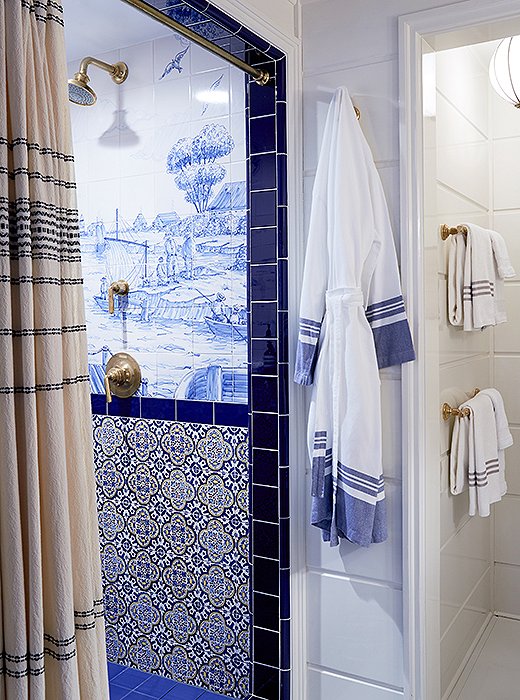 The custom nautical scenes on the bathroom tiles were hand-painted in Portugal and put together on-site like a puzzle. 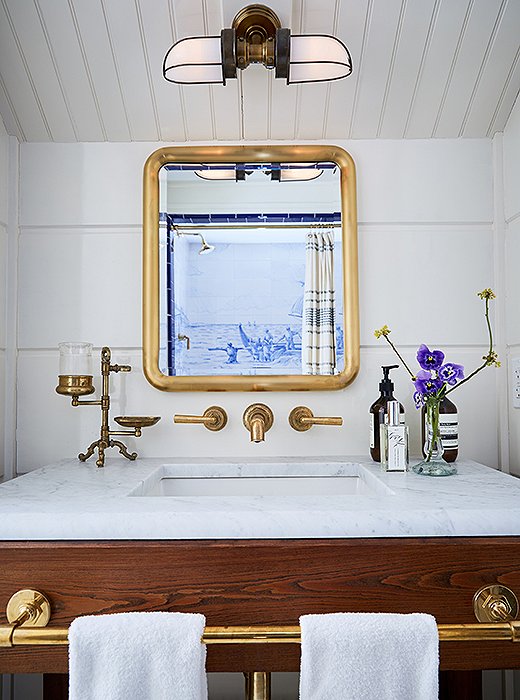 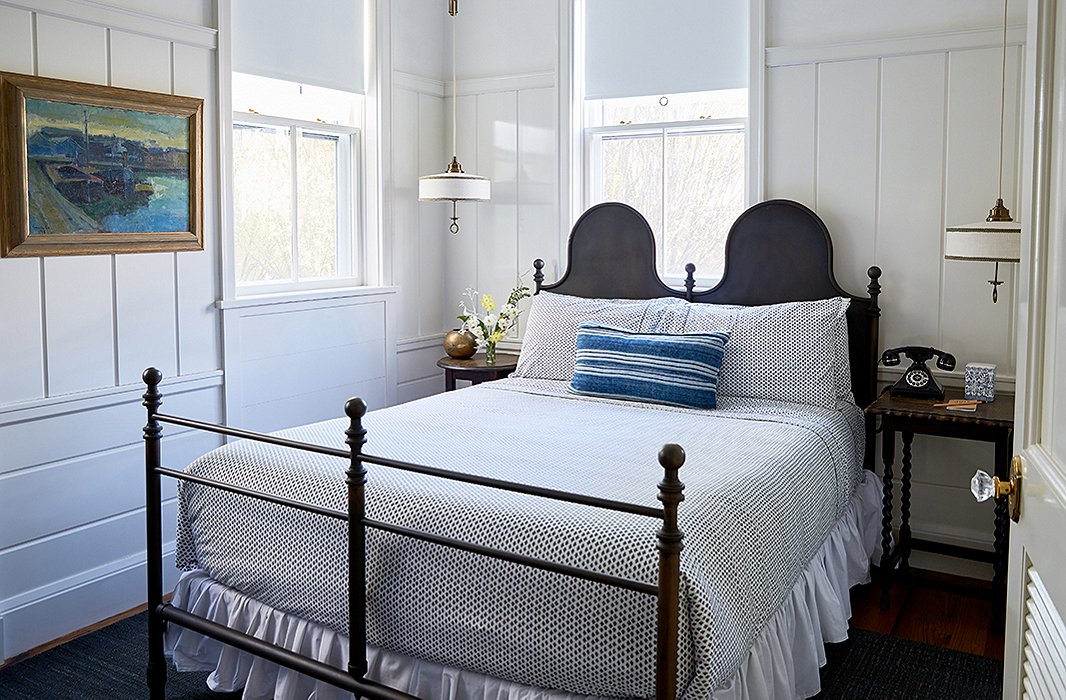 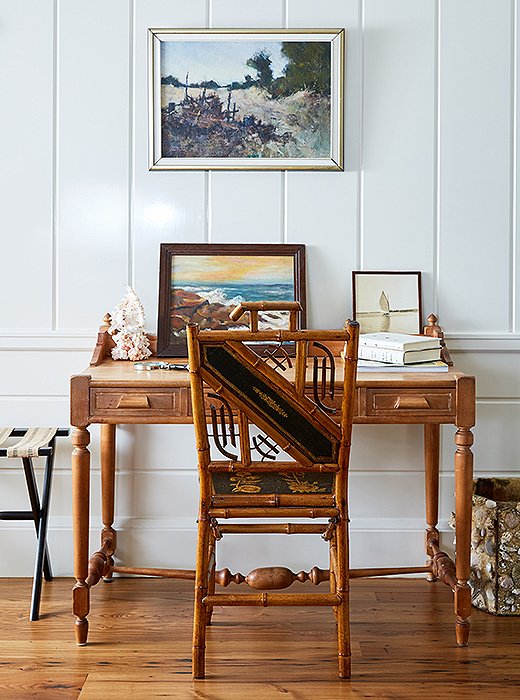 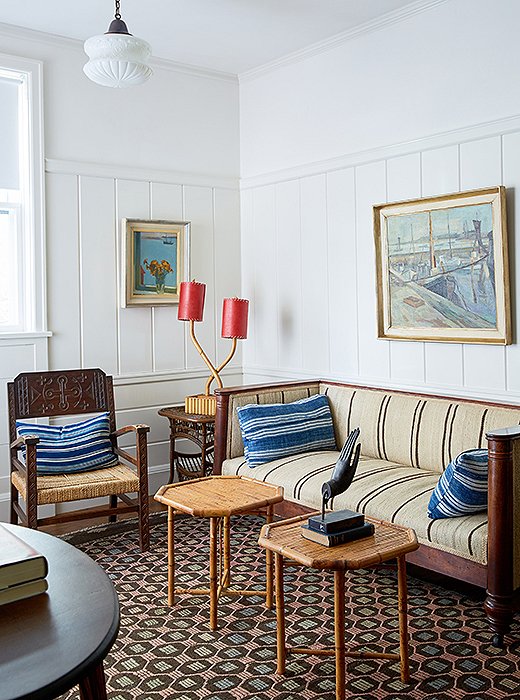 A seating area in one of the suites features an eclectic collection of antiques, including an English sofa, bamboo pieces from the South Pacific, and Nordic paintings. 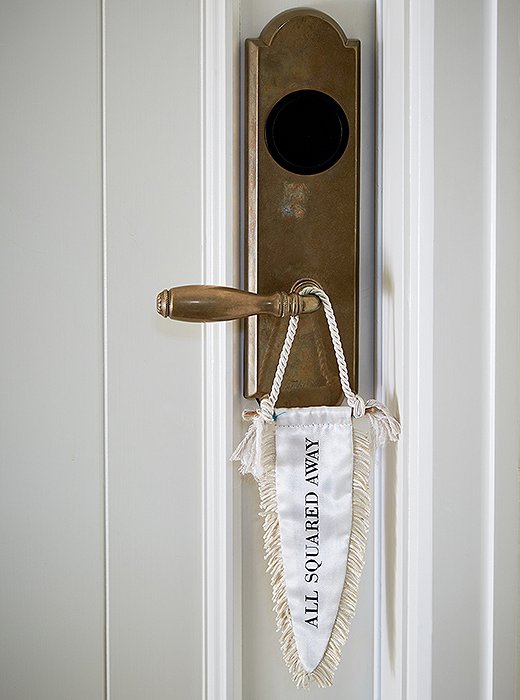 The owners worked with Cory Schifler of Urchin Workshop to design cheeky accessories for the space, including these doorknob flags—a creative take on “Please make up this room.”

We wanted to create a hotel with an atmosphere that was set within the culture and climate of Nantucket. 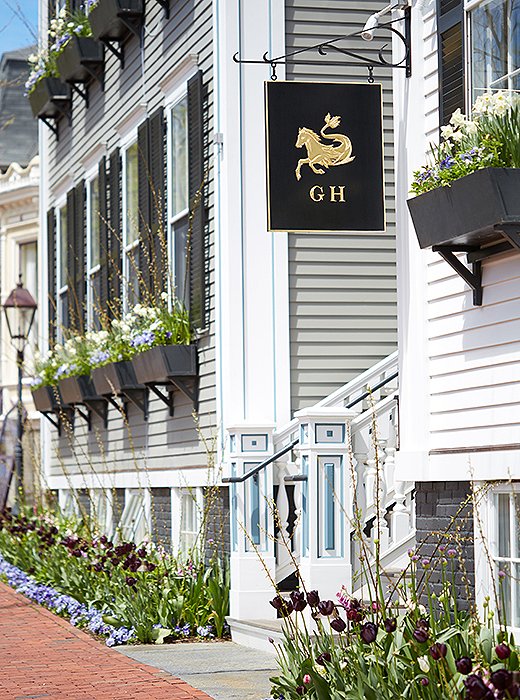 Roman and Williams worked with landscape designer Marty McGowan to create the vision for the garden, which boasts a wild, untamed feel and plantings from around the world. 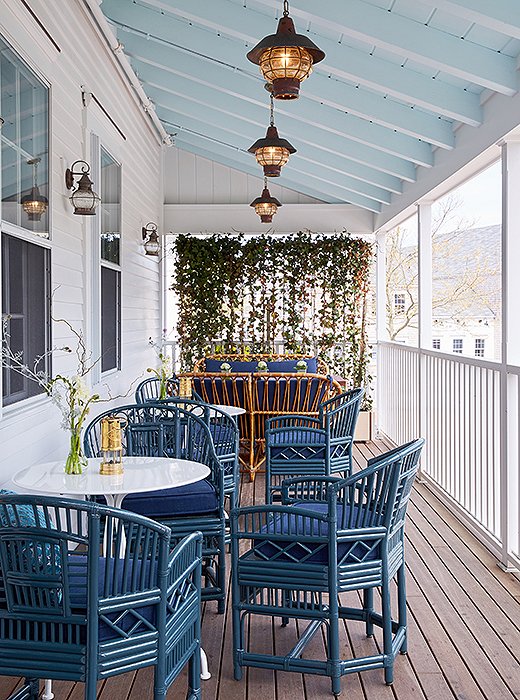 The restaurant seats lunch and dinner guests on the covered side porch. The bamboo furniture gets a modern makeover in bright blue, one of the hero colors throughout the property.