Beneath a magnificent ginkgo stands a Greek Revival home surrounded by mowed grass, hedged boxwoods, and a limestone wall separating it from a neighborhood of Victorians just beyond. Fast asleep on its gated drive are Gertrude and Lily, two yellow Labradors who, if prompted, rush to greet all who enter the compound known as Historic Botherum. A Lincoln-era property situated in the heart of Lexington, KY, it belongs to landscape designer Jon Carloftis and his partner, Dale Fisher. During the past five years, they’ve worked as a team to restore the home and its surrounding grounds to a contemporary version of its former glory.

“We wanted to preserve as much of it as we could,” says Jon. “We didn’t want to ruin what was already in play with a full-on renovation.” And so floors were buffed and topped with five coats of tung oil, fixtures were taken out, polished, and reinstalled, and the existing layout was maintained. Of course, there were a few exceptions—enhancements, rather, made in the interest of Southern comfort. A saltwater pool wasn’t included in the original plans, but one was added, albeit carefully screened by a period-appropriate plantscape. Claw-foot tubs? None here. Jon prefers showers to soaks and felt no need to indulge in antiquated frivolities. “It’s not like we’re living in a museum,” he laughs.

And therein lies the true story of Botherum as it exists today. Preserved but not dead, it is a portrait of the couple who live there, reflecting their infectious personalities as much as it does a glorified past. Order and chaos can be found throughout the home’s interior, highlighting Jon and Dale’s shared sense of humor but different ways of being. “When I was a kid,” Jon says, “I was outside romping around and chasing butterflies. Dale, on the other hand, was most likely very much inside, ironing his socks.” Laughter ensues, reverberating off a marble bust strung with colorful beads, a taxidermy bison affectionately called Otis, and an antique sideboard covered in birds’ nests saved from transplanted trees. Rarely does a home possess so much character. See their inspiring mix below: 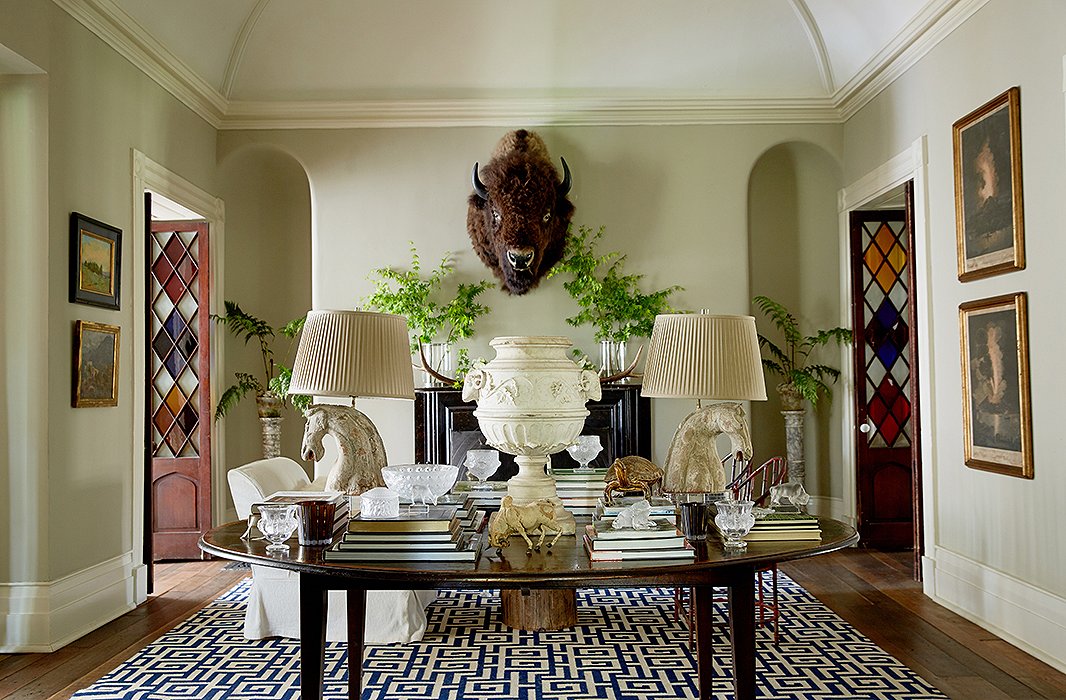 In the foyer, most all is vintage save the blue-and-white rug emblazoned with Greek keys. From between branches (cut from the yard) hangs Otis the bison, watching over a central table stacked with coffee table books and Dale’s collection of Lalique glassware. Sculpted stallions crowned by pleated shades flank a marble urn, emphasizing the home’s ties to horse country. 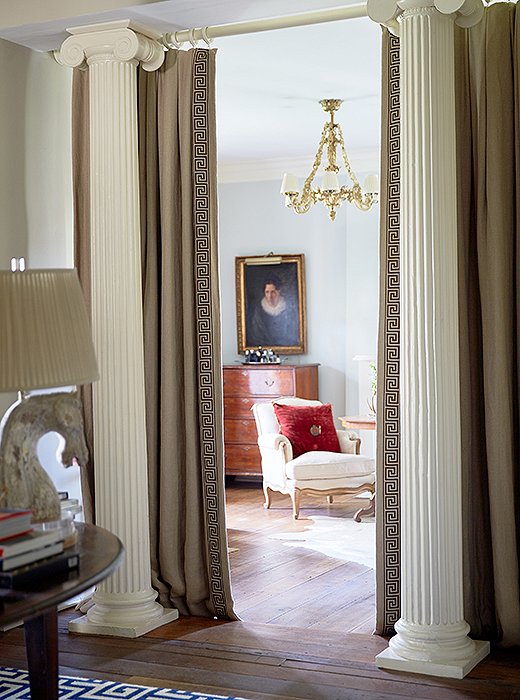 Ionic columns and custom drapes shield the guest room from visiting eyes. “We wanted the home to feel as open as possible,” says Dale, “so we decided not to close the space off with a wall and used fabric instead.” Such a decision maintains spatial flow and also allows the bedroom’s natural light to flood the windowless foyer. 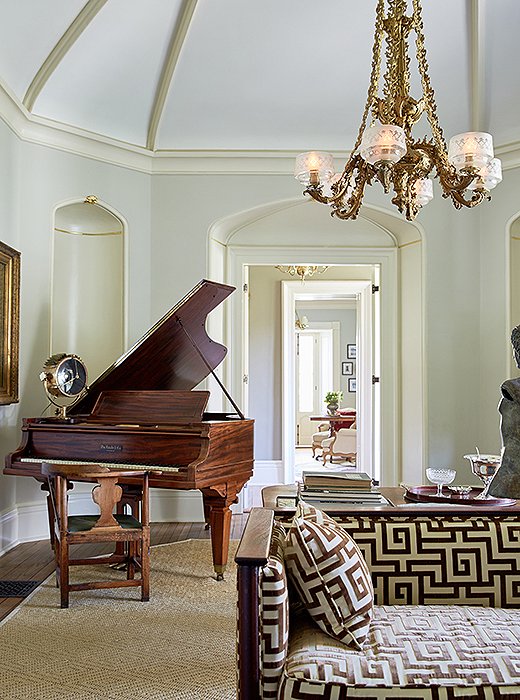 A ship’s light graces the piano in lieu of silver frames, casting a sunsetlike glow on the entire room when on. 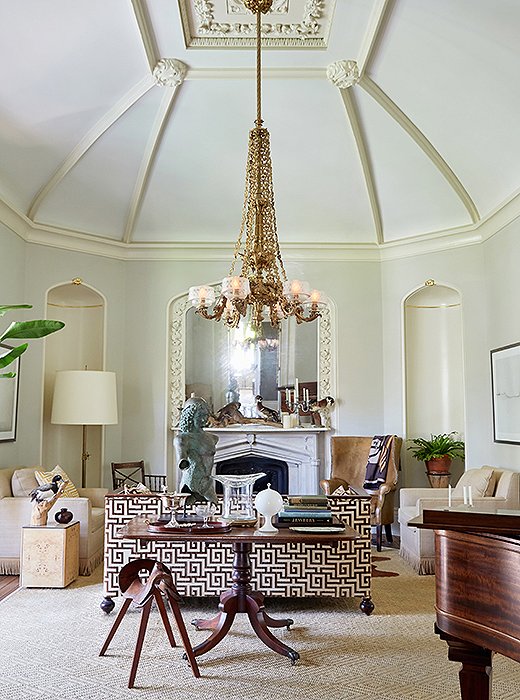 Made with diamond dust, the fireplace’s angled mirror is original to the house. Perfect for those who throw parties, it is slanted to allow a host to keep an eye on all of his or her guests at once. An English table anchors a vintage sofa reupholstered in laser-cut velvet fabric, while a Stark sisal lends a casual touch to an otherwise formal room. 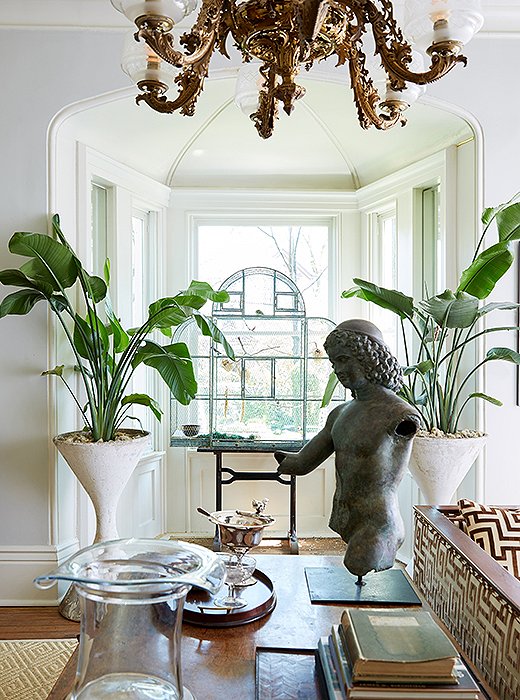 Housed in a Victorian-style aviary, colorful finches bring sounds of the outside in. Their song tells Jon and Dale when it’s time to rise. On the table just in front, a ’70s ice bucket in the shape of a top hat is one of their thrift-store finds. 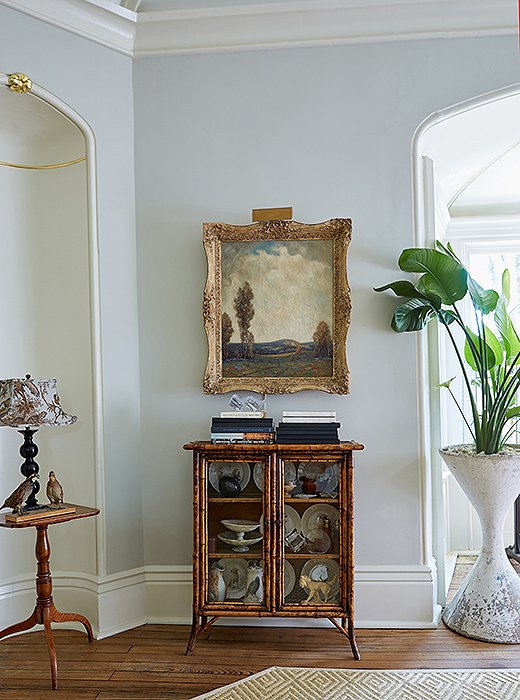 A Brighton-style bamboo cabinet sits beneath an English oil painting. “The art helped inform the room’s wall color,” says Jon, but it was Dale who chose all the swatches. In this case, Sherwin Williams’s Aloof Gray provides a cool contrast to the space’s brassier hues. 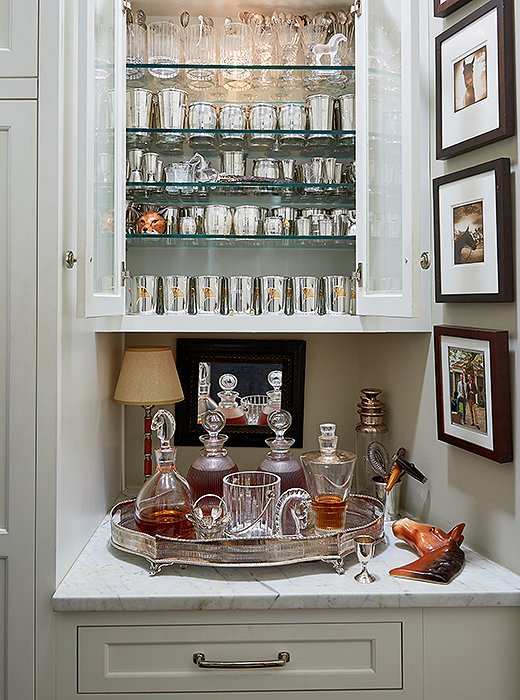 Off the living room is a closet complete with a bar just for bourbon. Silver sipping cups and crystal tumblers above decanters of Maker’s Mark and Bulleit glisten when lit. “It certainly makes getting dressed a whole lot more fun,” laughs Jon.

We were careful to keep the details that make each room grand. It gives them drama… and I always want the drama of a room. 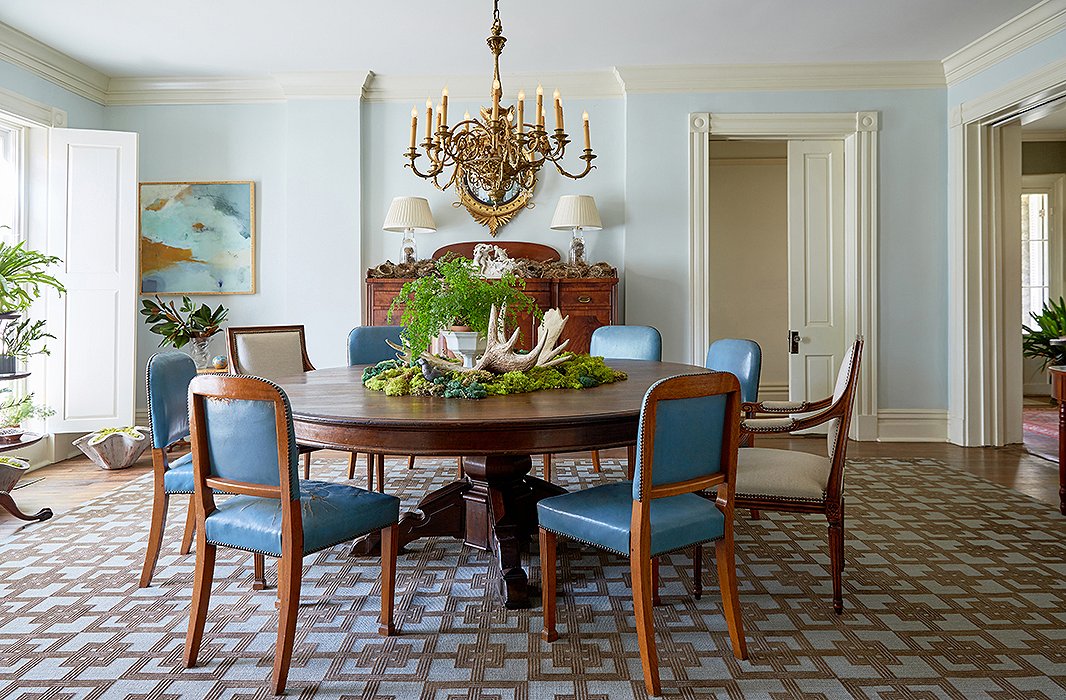 A pedestal table for 12 surrounded by mismatched chairs is centered under a brass chandelier. The centerpiece is changed out seasonally but remains consistently green in warmer months. “Moss, ferns, whatever’s available I tend to use,” Jon says. Behind, a sideboard covered in birds’ nests collected from transplanted trees minimizes any sense of formality. 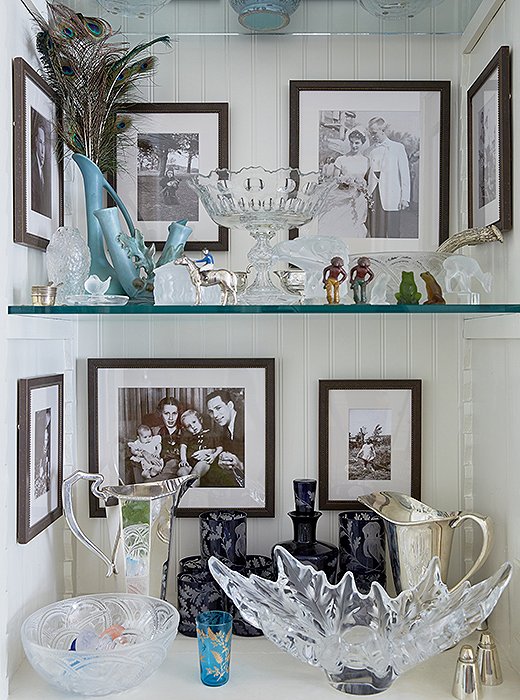 Built-in shelves serve as a place to display family photographs and prized possessions with shrinelike effect. 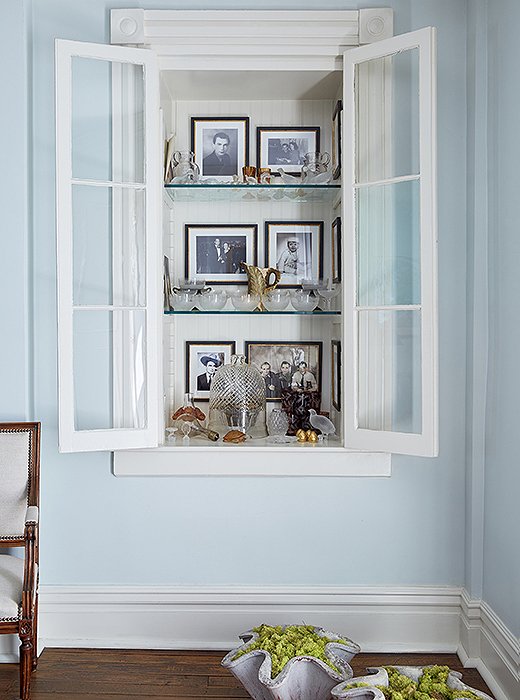 A second cabinet showcases images and mementos that speak to Jon’s family history. 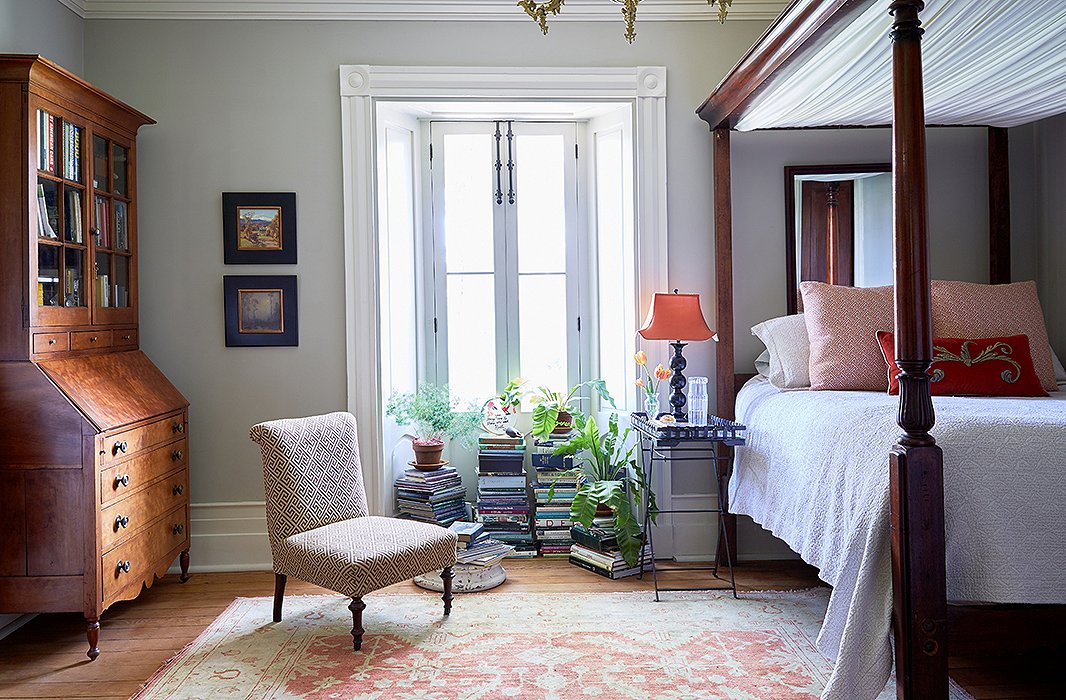 In the corner of the master bedroom, a secretary desk lends a sense of symmetry opposite the refurbished canopy bed.

Most people have too much stuff, so we try to edit every now and then. The house itself is more beautiful with less in it, so we’re careful to keep only what we really love. 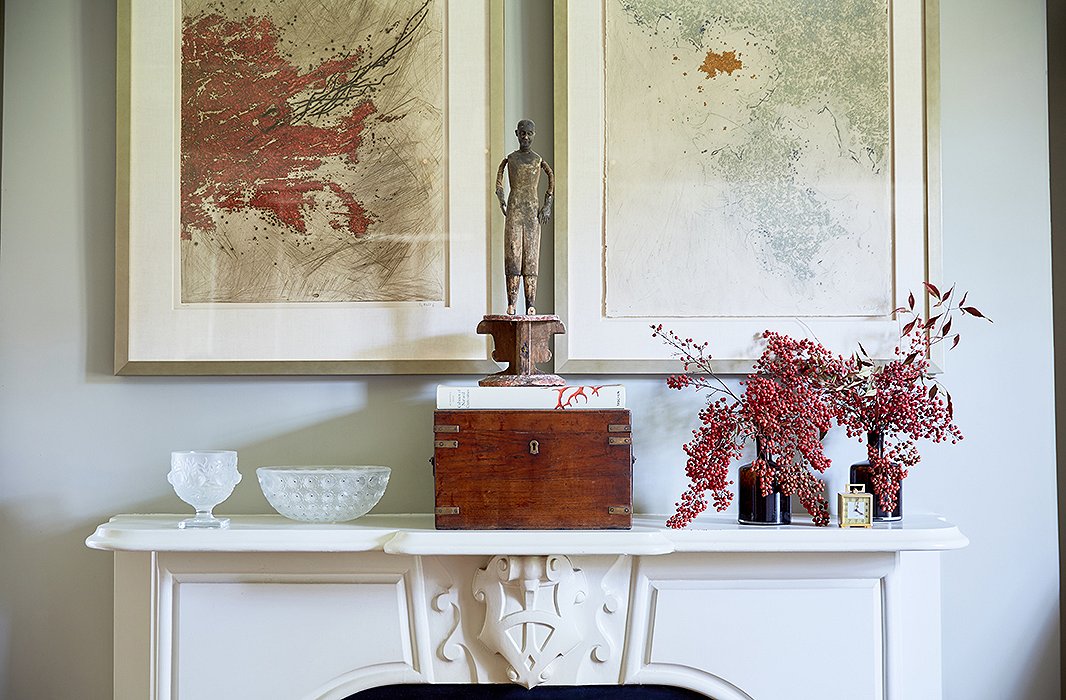 Dale discovered these Japanese paintings from the ’40s when he accidentally kicked one left to lean at the base of a store’s wall. 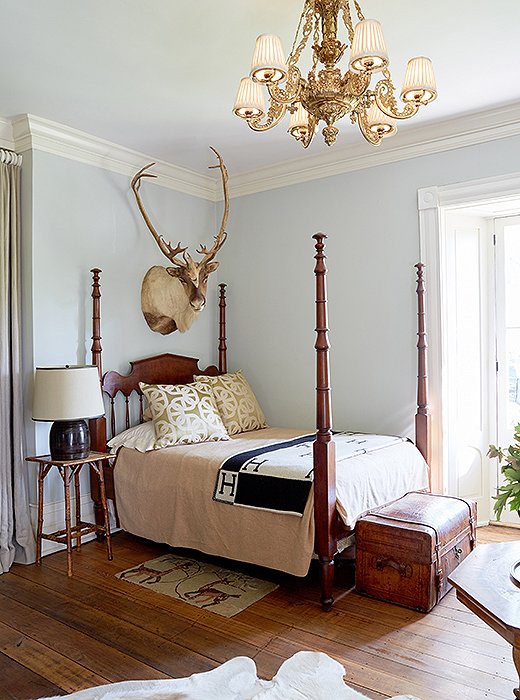 In the guest room, a four-poster bed footed by a leather trunk is made to feel fresh with the addition of a black-and-white Hermès throw. 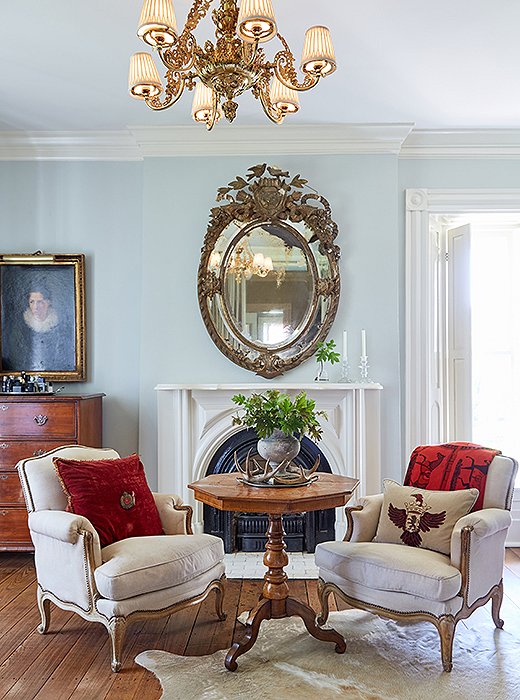 The organic shape of a hide rug provides a contrast to an octagonal table centered to the fireplace and an antique mirror. Bold touches of red, as seen in the crushed-velvet pillow and the cashmere throw, draw the eye toward the architectural focal point just behind. 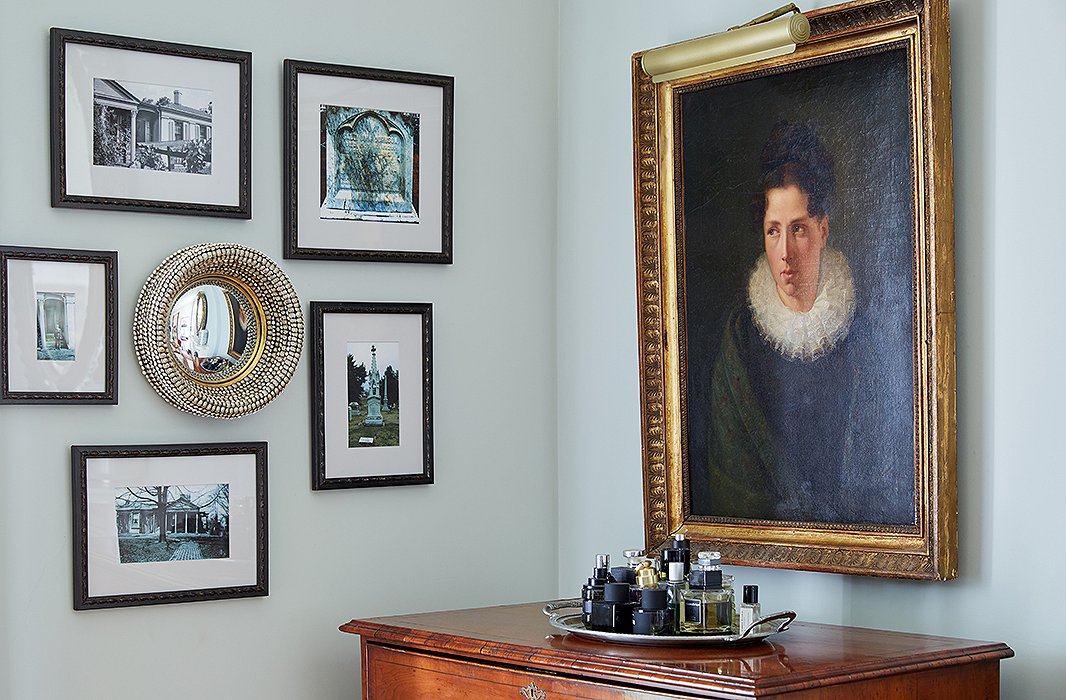 A butler’s chest from the early 19th century holds court with an old portrait of an unknown woman. Taken by Clay Lancaster, an advocate of architectural preservation, the adjacent photographs of Botherum in its most dilapidated state remind Jon and Dale of how far the home has come. 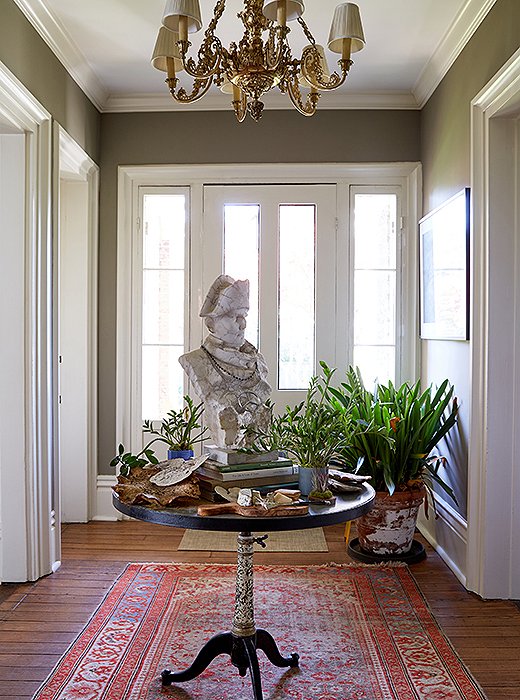 A bust of Napoleon rests on a table found in Nashville. Around its neck hang beads and a Mercedes-Benz medallion, creating a moment of humor in the pass-through space. 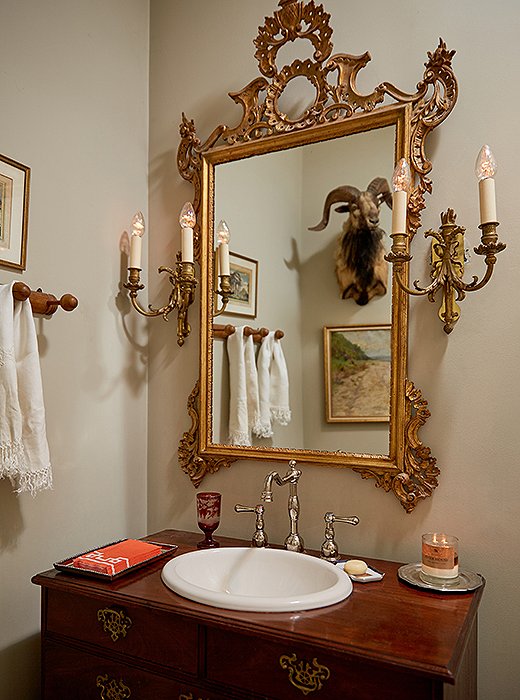 In one of the bathrooms, a Louis XVI mirror layered with gold leaf reflects another taxidermy head. A converted dresser serves as the perfect spot for a ceramic sink and silver fixtures. 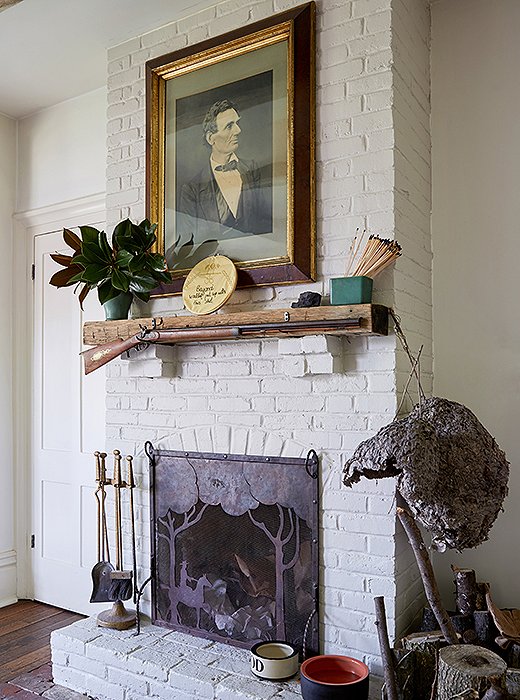 The home was commissioned by Madison C. Johnson, a confidante of Abraham Lincoln. It’s fitting, then, that his portrait hangs above the kitchen’s mantel. 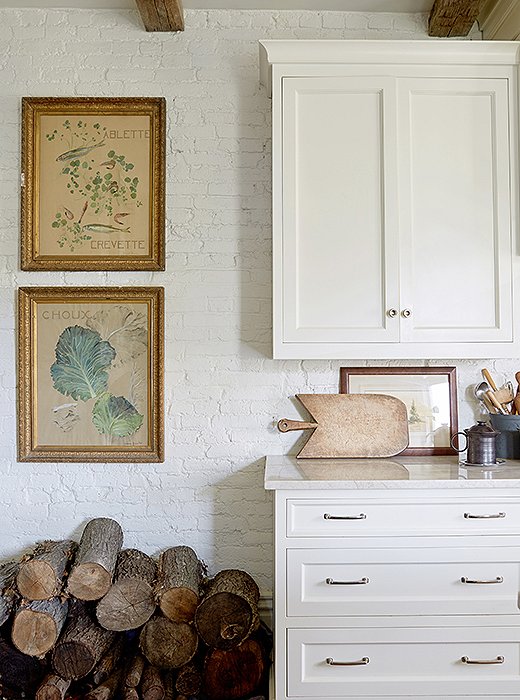 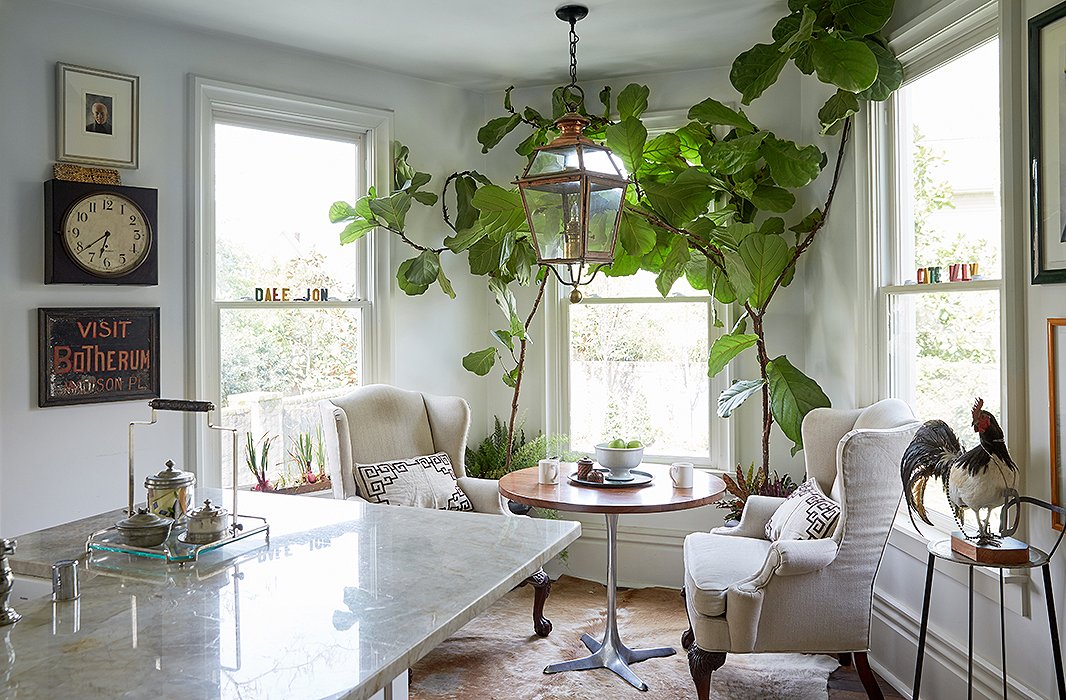 A window nook allows enough light for a pair of fig trees, under which Jon has his morning coffee and schedules his day. The copper lantern is yet another touch that brings the outside world in. “I sit here and I get centered,” Jon notes. “Looking at the trees blow outside, the sunlight pouring through, I remember what really matters.”

We can go into a store separately, and afterward, if we ask each other, ‘What was your favorite thing?’ 95% of the time it’ll be the same piece. 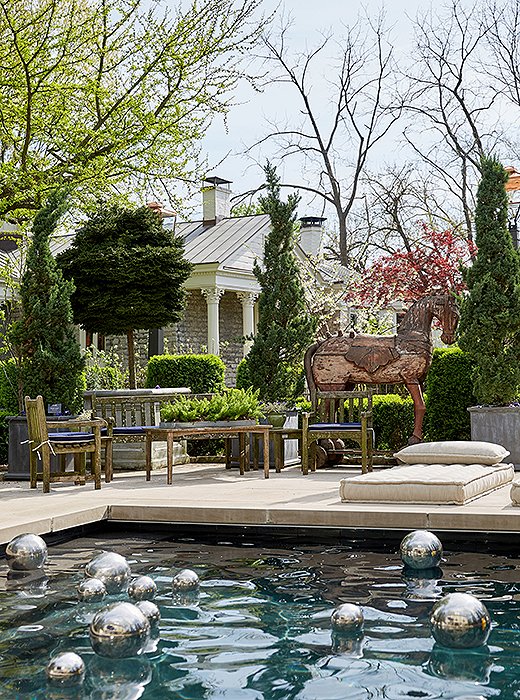 Silver orbs float in the saltwater pool behind the main house. Kept hidden by hedges and a life-size wooden horse, it’s a well-used feature on hot and humid Southern days. 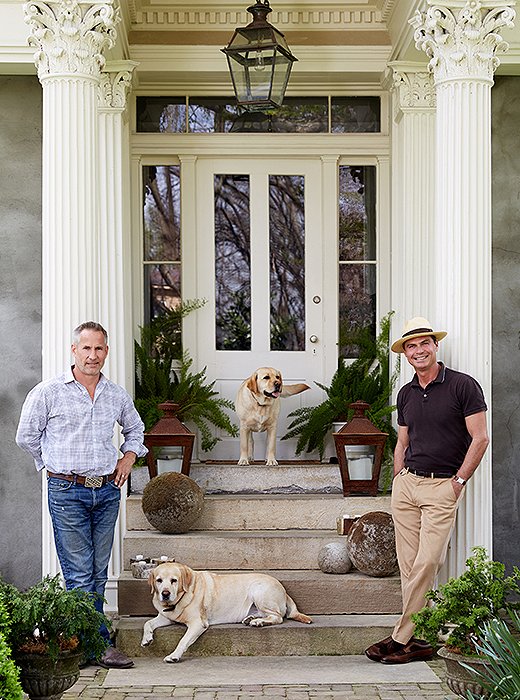 Dale, Jon, Gertrude, and Lily pose for a portrait on Botherum’s front steps.

Shop the look of Jon and Dale’s home