A couple of blocks north of San Francisco’s postcard-perfect Alamo Square, interior decorator Stacie Flinner has perfected small-space living. After relocating from New York City when her husband was transferred, she left the fundraising world behind her and seized the opportunity to turn a lifelong passion into a career and launch her own design firm. 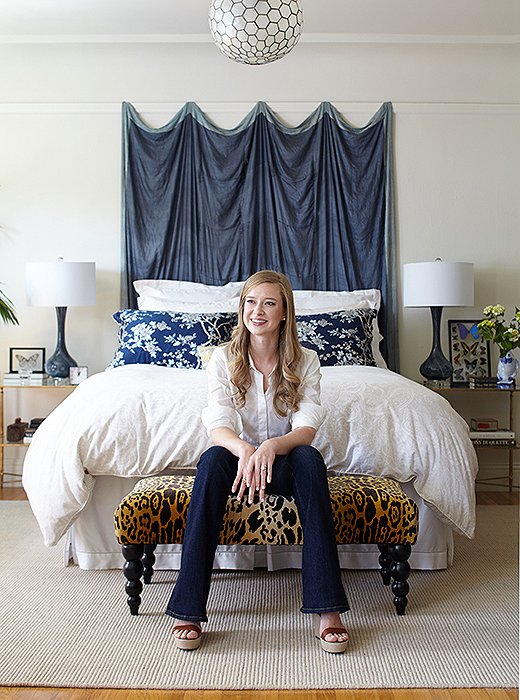 Stacie discovered the textile that hangs above her bed while she was doing a fellowship in India. “I just loved the beautiful and rich textile heritage that India has, so that was my bedspread there,” she says. “It’s not quite large enough to put on a queen bed, and ultimately, it’s actually quite delicate. It’s ended up working much better as a wall hanging.” 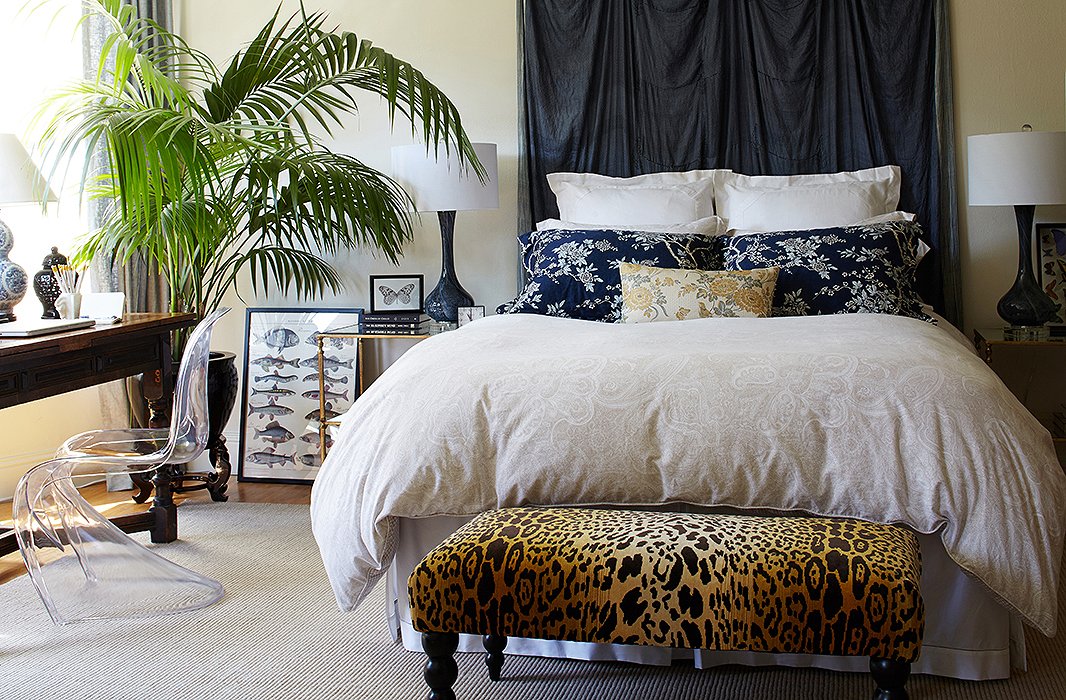 The leopard-print bench at the foot of Stacie’s bed acts as a daily place to put on shoes and can moonlight as dining room seating when she’s entertaining.

Moving from a studio apartment in Manhattan to a one-bedroom in San Francisco certainly provided an upgrade in square footage, but given Stacie’s penchant for entertaining, it was no cakewalk. “You have to be intentional when you’re working with about 900 square feet and like to host big dinner parties,” she tells us. Multipurpose pieces, like her Jacobean draw-leaf bedroom desk—which can expand to 10 feet in length and be used as a dinner table—come in handy. “We sometimes disassemble the pedestal table, or we can put it in our entry hall and that can be a second dining room. The sofa will usually end up in our bedroom,” she adds. “Yeah, it’s a major production.” 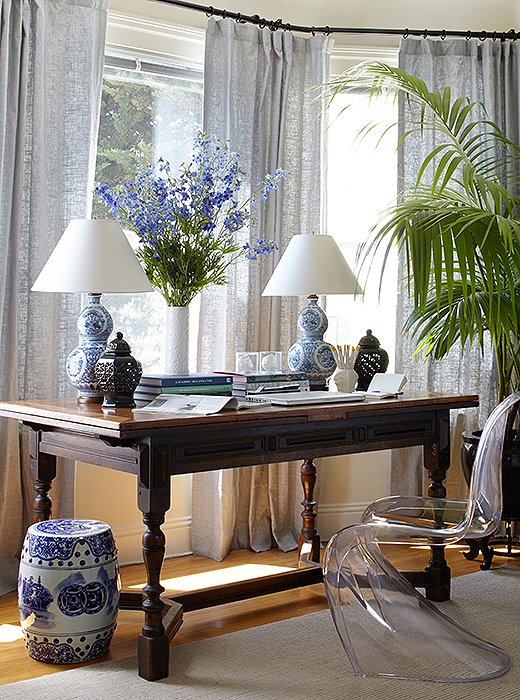 Stacie discovered her Jacobean draw-leaf table on Craigslist. “It normally sits in the bay window in our bedroom, and we often work from home, so we use it as a desk,” she says. “It expands to 10 feet, and it will fill the whole living/dining room when we rearrange the apartment for big dinner parties.”

“A lot of our pieces are intentionally on a smaller scale, so they can be really versatile,” Stacie tells us. “We have a bunch of chairs throughout the house that are easy to move around.” Another furnishing she swears by? Ceramic garden stools. “I have six,” she says. “They’re perfect for those big dinner parties because they take up such a small footprint. They work as side tables, hide ugly radiators… They’re just so versatile.” 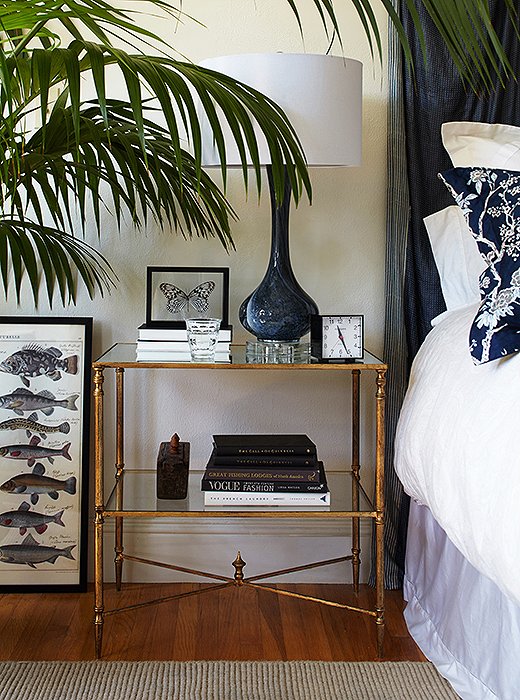 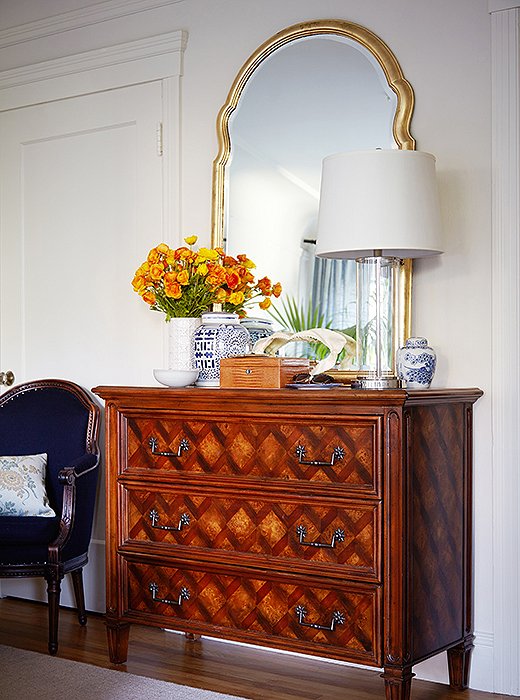 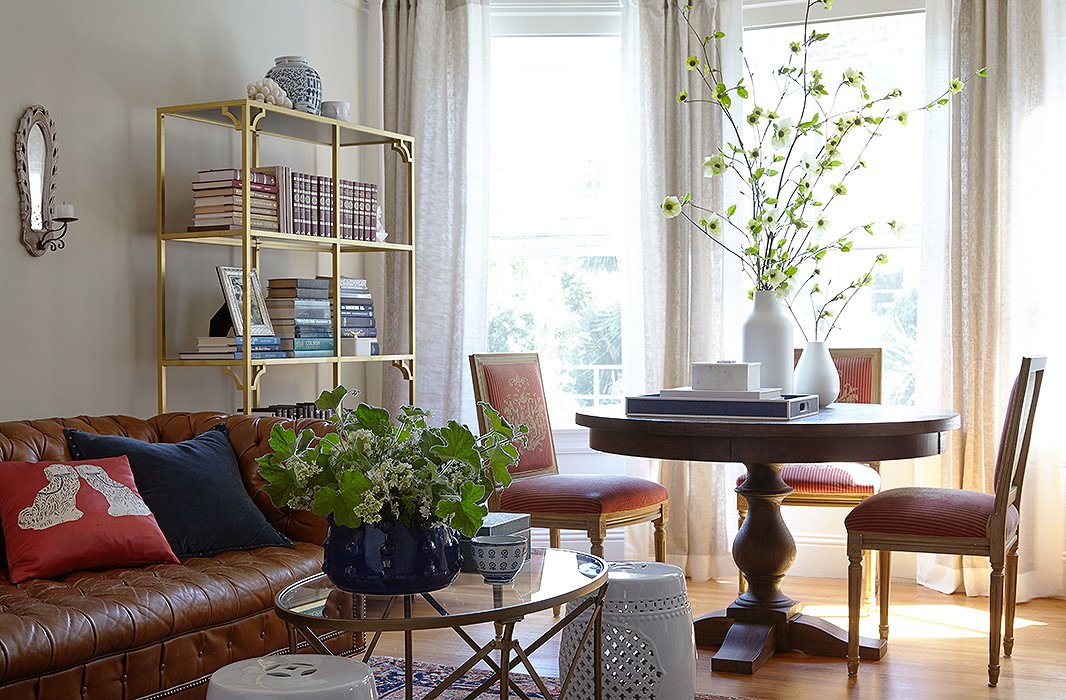 When entertaining, Stacie disassembles her pedestal table to make room for her Jacobean desk, or she moves it to her entry hall, where it can be used as a second dining table.

Before signing the lease on her apartment, Stacie measured the whole space and created a floor plan to ensure that all her entertaining must-haves and sentimental pieces would fit. “We don’t really want to reinvent the wheel each time we move,” she says. “We want to make sure that everything has a home.” Furnishings like her eight-foot church pew—not exactly practical, but a favorite piece of her husband’s—had to find a home; in this apartment, it works as a bench for a kitchen bistro table. 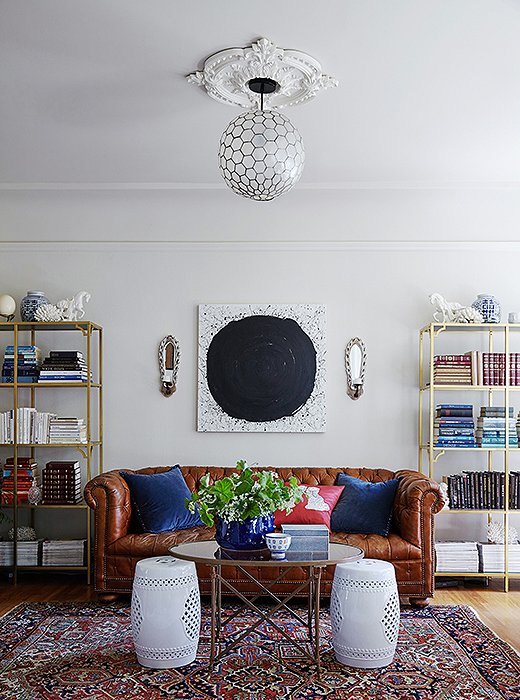 Stacie and her husband discovered their leather chesterfield sofa on Craigslist in Manhattan. “It’s beautiful and incredibly well made, and we got it for a song,” she says. 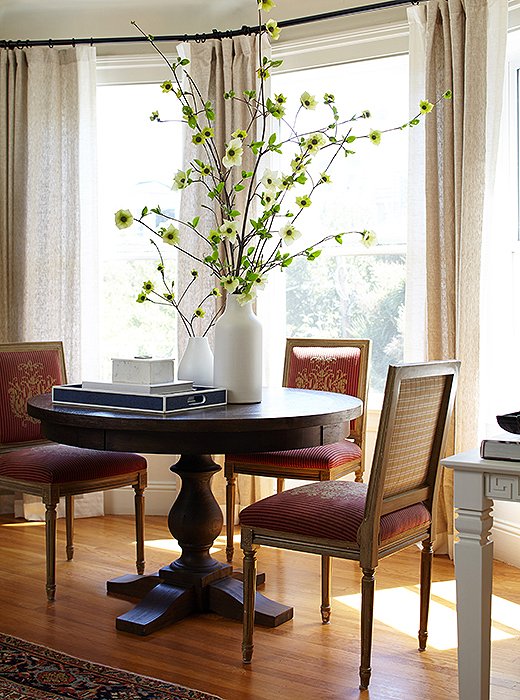 One of Stacie’s greatest decorating challenges was noise control. “I was surprised when we moved here that the walls seemed to be quite thin,” she says. “Getting really large, thick rugs and drapes to absorb sound was really important to us.”

Another must-keep was the couple’s Iranian rug. “It was the first major purchase we made for our apartment when we got married and moved in together,” Stacie says. “It was a really collaborative process but then a leap of faith, because we ended up buying it from an antiques store in L.A. sight unseen.”

The rug proved to be a source of inspiration for the color scheme, Stacie tells us. “We drew a lot of colors out of that, and it has a lot to offer. It has green, pink, and rust colors, so we used that as a foundation. A lot of our other pieces are relatively neutral—a lot of navy and camel colors.” The couple chose a muted shade for their walls “mostly because it took so many coats of paint to restore the navy apartment [in New York] back to white. We just weren’t up for that again,” she admits. 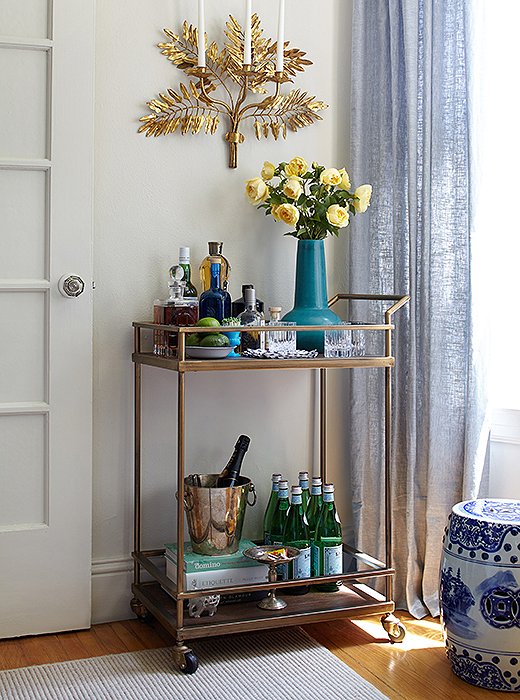 On her bar cart, Stacie stocks the essentials: citrus, spirits, champagne, and Pellegrino. 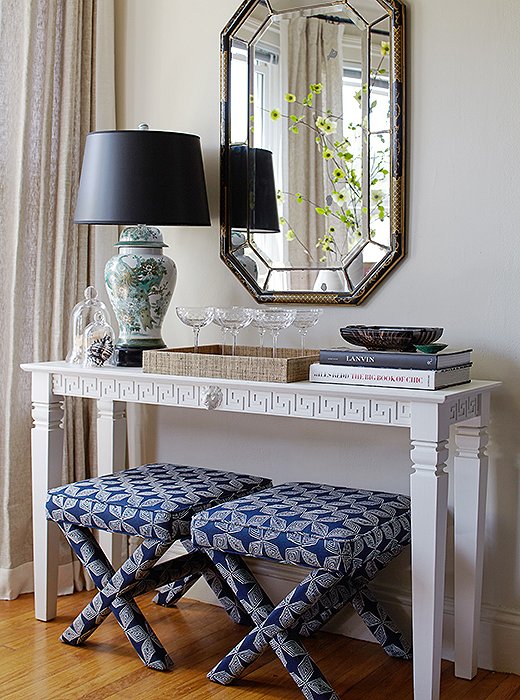 After much debate over more-affordable options, Stacie and her husband decided on their black-and-gold octagonal mirror. “I think that our favorite things in our home are the ones that we were both a part of the process selecting,” she says.

From a Greek key console to a modern brass bar cart to a vintage leather chesterfield sofa, Stacie has pulled together an eclectic mix of styles and eras in her home—though, she points out, continuity helps bring her collection together. “I feel like the dresser and the chesterfield sofa have similar lines in the diamond pattern,” she says. “Similarly, I have two pieces of Lucite, and two pieces that are black lacquered with an Asian-style painting on them.” When asked to describe her aesthetic, she offers a few words: “Laid-back, glamorous, traditional, and perhaps a twist of the exotic.” We couldn’t have summed it up better. 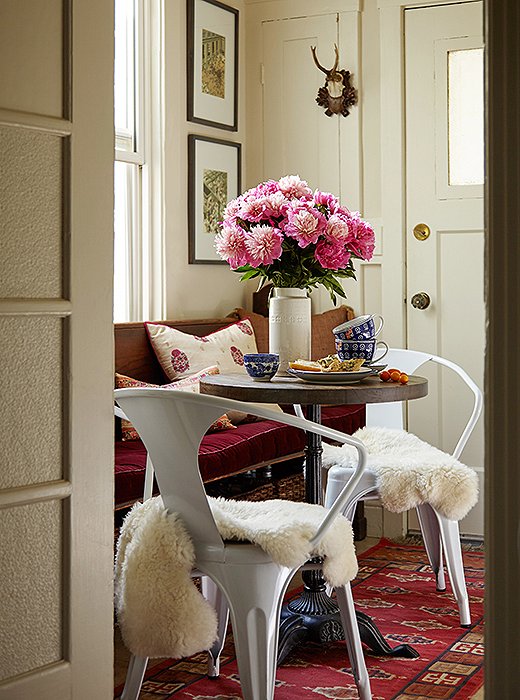 “Up until recently, we were pretty hard-pressed for space, but then we ended up tucking baskets pretty much everywhere in the kitchen. There are five baskets underneath the pew, and that was wasted space before,” the decorator tells us. “We use them to store a lot of things like tons of Pellegrino or party essentials that aren’t used on a regular basis.” 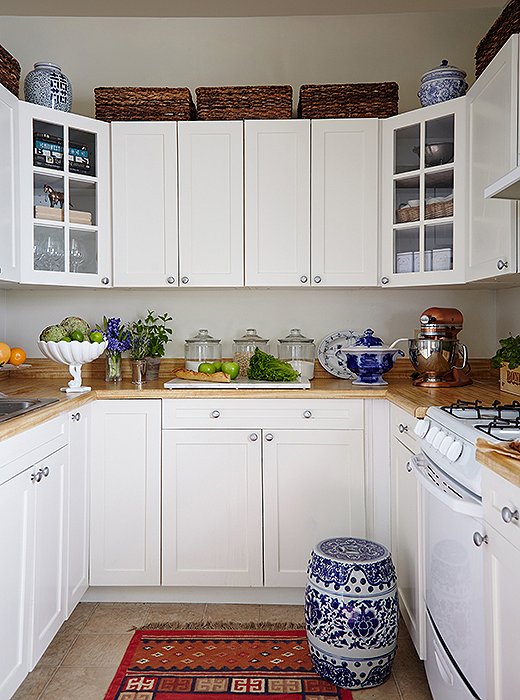 Short on kitchen storage, Stacie displays a lot of items, such as her favorite Dutch oven, which lives on the stovetop. “We have glass jars that keep frequently used things like flour and sugar on the counter.”

How to Create a Stellar Small Home Office

Ideas for even the smallest studio apartment… 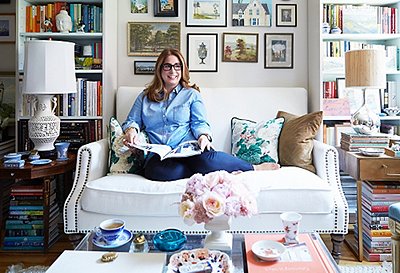 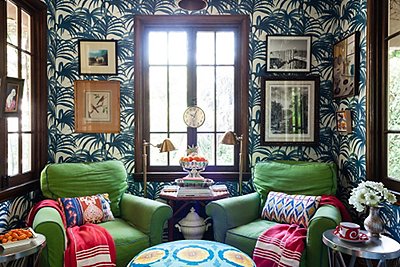 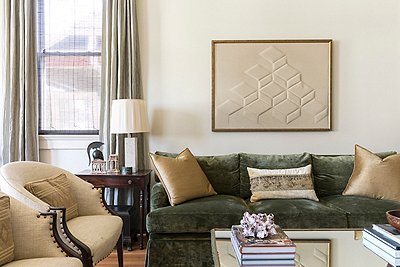 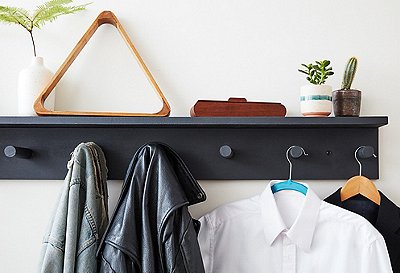 How to Create a DIY Modern Shaker Peg Rail 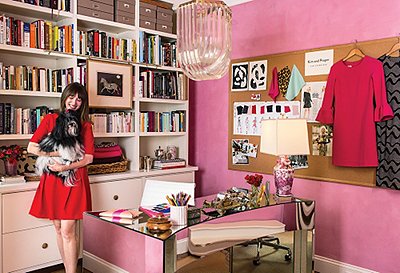